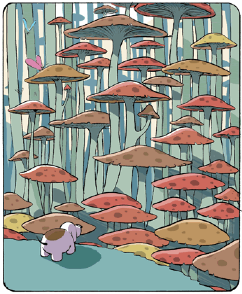 "Don't look now, but there's a humongous fungus among us!"
—Red Green

Sometimes in fantasy works there are mushrooms that are larger than average. While some actual mushrooms have been known to grow as large as soccer balls, in fiction mushrooms can grow to be as large as people, or even trees, leading to whole forests of nothing but mushrooms. Sometimes they are merely supposed to be an unusual flora used to convey the alien nature of the place, when unreal or differently sized trees, grass, and the like just wouldn't seem alien enough. Other times they are supposed to show corruption, an evil blight that is spreading across the land.

Does not apply to tiny people living in regular mushrooms, since in those instances it is the people that are unusual, not the mushrooms. Also does not apply to mushroom clouds, which are just mushroom shaped. Nor does it apply to sentient fungi, since they are not necessarily part of the scenery, unless they are so humongous that they dominate the scene. See Mushroom Man for that sort of thing. Of course, if they live in giant mushrooms, that is another matter. However, it may cross over with Springy Spores if it's in a video game level.

Named after the fun wordplay "A fungus among us" that pops up in many different forms of media, including an album by Incubus.

This is usually considered a Plant Trope, even though fungi are not, you know, plants.

Examples of Fungus Humongous include:

Knuckles: There are large jungle mushrooms on my island, too... but not this huge.