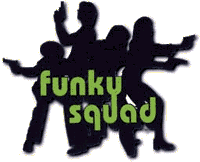 Funky Squad was a hit show set in The Seventies. What? You mean you missed it? Completely? Well, here's the deal...

In reality, it was an Australian comedy series created in 1995 as a parody of shows like The Mod Squad where the cops hire a group (in this case, four) of hip undercover cops. Who, in this case, are all wearing bad wigs and hopelessly 1970s fashions.

Compare Danger 5, another Australian parody of '60's spy shows, as well as Garth Marenghi's Darkplace, a British show with a similar premise about '80s supernatural dramas.

Tropes used in Funky Squad include:
Retrieved from "https://allthetropes.org/w/index.php?title=Funky_Squad&oldid=1900672"
Categories:
Cookies help us deliver our services. By using our services, you agree to our use of cookies.