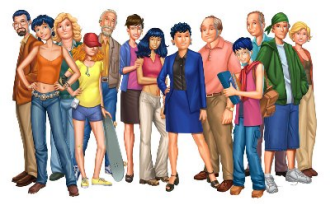 Smiling (and smirking) in spite of their impending doom.[1]

If Coleman Francis were to have drawn a comic strip, it would go something like this. No, really.

In the beginning, namely, The Seventies, this was a simple gag-per-day strip set at a High School in "Westview," a nondescript suburb[2] of Cleveland, Ohio. With a literal hurricane of Punny Names, corny jokes that would rival Pearls Before Swine, and all characters locked in Comic Book Time, this strip was a dependable, if not remarkable, fixture on the comics page.

Regular gags/stories during "Act I" involved, among other things, silly answers to test questions, Les Moore's incompetence at gym, a sentient school computer with a transporter beam, Holly Budd's ability to burst into flames whenever she performed her routine, the follies of the perpetually winless high school football team -- nicknamed the Westview Scapegoats -- and Harold Dinkle's attempts to win the Battle of the Bands (which was generally rained out). As Funky primarily had the most appeal in the Cleveland area, cameos by celebrities from the region occasionally took place. Basically, it was light-hearted fare, even when Lisa became pregnant in a 1986 teen-pregnancy storyline.

In 1992, Tom Batiuk, the creator of the strip, quite deliberately decided to initiate Cerebus Syndrome (not that it was called that then): he figured that 17 years in high school was long enough. He ran a graduation storyline, and to indicate - and hammer in - the change of tone, he had the class overachiever suffer a complete nervous breakdown in the yearbook room after hearing that the position of valedictorian would be chosen by popularity, and after a brief standoff. Then we got Les Moore's valedictorian speech (which is universally considered underwhelming), and then there was a Time Skip...

And then there was "Act II." And Angst: For every good thing that happened to the cast (Funky married to Cindy, Les married to Lisa) there were two bad things (Funky is a divorced recovering alcoholic, Lisa died after a breast cancer relapse) and one thing that was revealed to be worse than we thought (Lisa's teen pregnancy retconned into date rape, Bull's Jerkass nature as a result of parental abuse). The nature of Lisa's death attracted a significant level of notoriety, as it was made known to the general public by Batiuk a full year in advance.

And then in 2008, immediately following the death of Lisa, Batiuk decided there needed to be a second Time Skip to turn things over to the kids of the original cast. Even then, the majority of the storylines in "Act III" have focused more on the adults experiencing even more traumatic events and angsting about them and less on their children, though a handful of stories have focused on the lives of the teens.

The comic today is widely seen as Snark Bait for being unrealistically and relentlessly depressing in some storylines (some of which abruptly end with no denouement to speak of), and almost totally inappropriate in others with Batiuk's continued usage of incredibly lame puns and accompanying smirks. Regardless, it's a Long Runner, and shows no sign of slowing down any time soon.

Two strips were spun off from Funky Winkerbean: Crankshaft, about a perpetually grumpy 80-year-old high school bus driver whose punchlines are almost always a ridiculous mangling of the English language, and John Darling, about a pompous talk show host who was murdered in the penultimate strip.

Tropes used in Funky Winkerbean include: