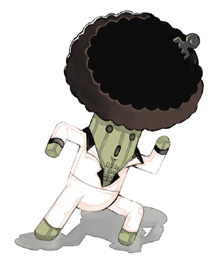 Despite odd hairstyles being par for the course, a character with an afro (usually male) is very likely to have it mentioned by other people and by the plot. This is sometimes extended into a love of dance and club music, if not specifically disco. If a character is forced to wear a wig, there's a good chance it'll be an afro. Hammerspace Hair often requires popping objects into and out of an enormous hair bulb.

As a sidenote, in Japanese just the word "afro" is rather funny because it just happens to sounds like "afuro", which rather accurately means "overflowing". Or, it could sound like "a furo" (yes, at least one anime has made that very joke)

Compare/contrast Afro Asskicker, when the afro is made up for by the sheer badassness of the wearer.

Examples of Funny Afro include:

Retrieved from "https://allthetropes.org/w/index.php?title=Funny_Afro&oldid=1842506"
Categories:
Cookies help us deliver our services. By using our services, you agree to our use of cookies.