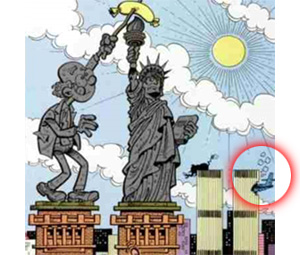 A scene, joke, or offhand line that was originally meant to be funny or light-hearted but which, due to traumatic events in future episodes of a show or in real life, now makes the viewer cringe when it is seen in reruns.

This often has to do with a character or actor's death and is named for a line from the Buffy episode "The Freshman" in which Buffy hopes that her mother will have a "funny aneurysm" when she sees the cost of Buffy's college textbooks. The line becomes cringeworthy after Buffy's mother dies of a decidedly humorless aneurysm in the next season.

Or, if you prefer, it's the moment when the funny drops down dead. A "funny aneurysm" is an oxymoron since having an aneurysm isn't funny; it's both and neither.

The inverse of this, where something in real life or more recent canon retroactively makes a lighthearted moment funnier, is Hilarious in Hindsight. Depending on your sense of humor (particularly your attitudes towards Black Comedy, Gallows Humor and Dead Baby Comedy), a "Funny Aneurysm" Moment could actually be funny in a dark kind of way.

In a Roger Ebert Movie Glossary column, he defines the (related) Pentimento Paradigm: "Pentimento is when images from an old painting seep through and become visible in a newer picture that has been painted over the old. Thus the relation is when what we know about a filmmaker or actor seeps into our perception of his film work. Example: Any old Rock Hudson movie now that his private life is no longer private. Being aware of the reality behind the fiction may add to the complexity of the drama (Taylor and Burton in "Who's Afraid of Virginia Woolf?") or distract from its intentions (Woody and Mia in "Husbands and Wives")." The Rock Hudson and Husbands and Wives examples are definitely "Funny Aneurysm" Moments.

There is also Harsher in Hindsight where the scene that's already tragic, becomes worse because of Reality Subtext or more recent canon. A joke about jumbo jets hitting skyscrapers published before 2001 will likely be a "Funny Aneurysm" Moment; a serious plotline about jumbo jets hitting skyscrapers that was published before 2001 is Harsher in Hindsight.

If this is done intentionally, this trope becomes a Cerebus Retcon.

NOTE: Since all actors and creators are mortal as far as we know, if someone mentions death or plays a character who dies, and then die themselves, that's not a "Funny Aneurysm" Moment unless there's some connection to the circumstances of the death.

Compare Too Soon, Dude, Not Funny, Harsher in Hindsight.

Contrast Hilarious in Hindsight, Heartwarming in Hindsight. Not be confused with Funny Moments - which is essentially the opposite, unless a recent event turns it into this trope.

Examples of Funny Aneurysm Moment are listed on these subpages:
Retrieved from "https://allthetropes.org/w/index.php?title=Funny_Aneurysm_Moment&oldid=1881128"
Categories:
Cookies help us deliver our services. By using our services, you agree to our use of cookies.