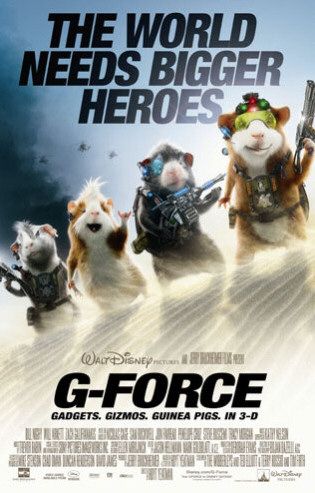 G-Force is a 2009 animated film produced by Jerry Bruckheimer for Walt Disney Pictures in Disney Digital 3-D. Written by Cormac and Marianne Wibberley, the film is the directorial debut of Hoyt Yeatman.

The film revolves around a special FBI organization of trained secret agent animals, equipped with advanced tools including an advanced earpiece that allows the mammalian members to talk to humans. The movie follows an attempt by corrupt officials to remove the G-Force and the groups attempts to survive and reconnect to take them down.

Not to be confused with G-Force: Guardians of Space, the second American adaptation of the classic anime Science Ninja Team Gatchaman.

Tropes used in G-Force include:

Juarez: You try to put a bow on me, you gonna lose a finger.

Speckles: I'm a mole. I got a thing for worms.