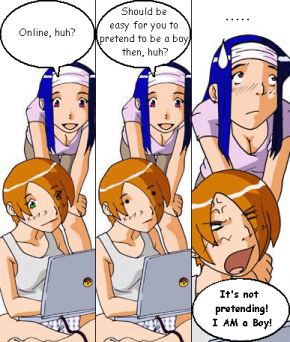 Yeah, keep telling yourself that.

Acronym for Guy In Real Life

Based on the belief that There Are No Girls on the Internet. Some forums, particularly male-dominated ones, will be the victim of a special breed of Troll who will pretend to be a girl just to rile up the boy nerds in the community. They display obvious Cam Whore traits and may even steal photos of attractive girls off Myspace or Facebook and claim that they are them.

In other cases they may copy photos of their sisters/daughters/nieces/female cousins off photo cd's or the like, especially if said females are of, or close to, the age of the online persona.

Female forum goers have a tendency to get a lot more attention, just by being girls, so many male attention whores use this to their advantage so that they get the attention they crave. They will play and flirt with the male members who may become tickled pink that a girl is talking to them this way. Sad, but true.

Will ultimately lead to a reveal where they show their true colors as blokes and laugh at the incensed regulars. Or, a Regular will wise up to his shenanigans and unmask him causing everyone to point and laugh at him as he slinks away with his tail between his legs. Could also be a practical joke played by a Regular to which everyone will simply have a good laugh. Most cases tend to end in the second case, which brings up the question of why such trolls even bother doing it since the risk of being exposed far outweighs the potential gain.

Naturally, any mention of online dating in the "Old Media" will end this way, whether played for laughs or for drama, because everyone knows the internet is solely the domain of perverts.

If you think this is bad, though, be grateful you're not dealing with a Mailer Daemon.

Note that not everyone who's biologically male who presents as female online is trolling; see Cross Player, Transgender. Leads to actual women on the Internet using male or neuter user names and fudging personal details specifically to avoid this trope.

This is often inverted on many female dominated forums, such as LiveJournal, where the default identity of new posters is assumed is female, and a guy, who acts normally but doesn't explicitly mention he is a guy, can go for a long time without anyone asking or realising, leading to "You're a guy??" moments 6 months down the track.

Examples of GIRL include: