Everything About Fiction You Never Wanted to Know.
Jump to navigation Jump to search
/wiki/GWARcreator 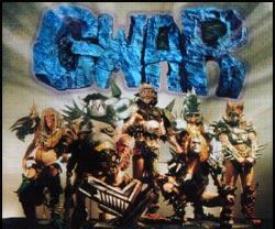 You go see GWAR, people die, it's as natural as rain on Sunday morning.

What happens when you take the theatrical stage performances of Alice Cooper, the costumes and makeup of KISS, Audience Participation of The Rocky Horror Picture Show, and throw it in a meat grinder? You get the self-proclaimed overlords of all existence known as GWAR.

Originally hailing from Antartica, then somewhere past Hell’s Eighth Lock, yet somehow having a mailing address in Richmond, Virginia all the while, GWAR is a shock rock/Heavy Metal band whose on-stage antics spray their audiences with blood, drugs, toxic waste, and other fluids.