Everything About Fiction You Never Wanted to Know.
< Game Breaker
Jump to navigation Jump to search 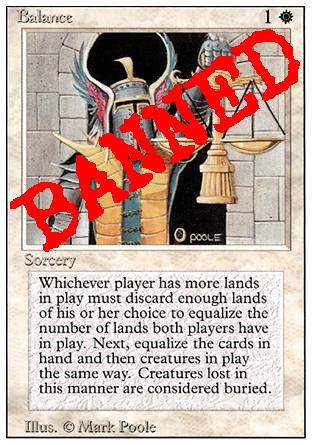 Names don't get much more ironic than this

Being the first trading card game, Magic: The Gathering has a lot of Game Breakers. Part of this stems from the fact that the original editions of the game were little better than an Obvious Beta (so much so that the second release of the Limited First Edition was named "Limited Edition Beta" (With the first being "Limited Edition Alpha")); indeed, like most games that are played extensively, the lion's share of Game Breakers are discovered by players post-release. But the fact that Wizards of the Coast keep trying new things can't help. (Well, it does make the game more fun; we're just talking about the inevitable impact on game balance.)

The most famous of these are the Power Nine, from Limited Edition, which are banned in every format except Vintage, where they're restricted to one per deck:

But there are far more. Bear in mind notes regarding bans and restrictions; Wizards have more recently taken a far more liberal stance on these, and many cards that were once restricted or even banned entirely have had their rulings relaxed from their previous status. In addition, most card errata that radically change a card's function (eg those formerly in place for Great Whale and Time Vault) have been removed in favour of simply clarifying the rules actually on the card.

Back to Game Breaker