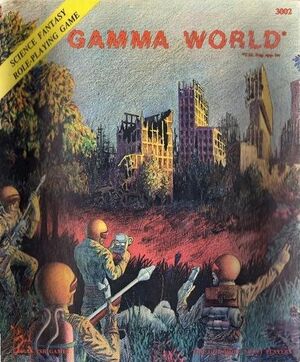 A classic role-playing game originally created by TSR, the same people who made Dungeons & Dragons. Centuries after a vaguely defined apocalypse, a radioactive and ruin-strewn Earth is inhabited by mutants, sentient animals and plants, and insane half-functioning robots, all of whom compete for influence as multi-species civilization begins its long climb to recovery. Gamma World was heavily influenced by TSR's earlier sci-fi RPG, Metamorphosis Alpha.

Despite what a newcomer might think, the tone is quite light-hearted, and the players are strongly encouraged to have fun and not think too hard about how silly it all is.

The game has gone through seven editions so far[when?]; TSR published the first three from 1978 to 1985 with their own unique rule sets. 1992's 4th Edition was based on the same engine as D&D's 2nd edition, and 1995's 5th was a supplement for the sci-fi RPG Alternity. In 2002, Wizards of the Coast, which had since absorbed TSR, published a wacky homage to Gamma World entitled Omega World in Polyhedron magazine.

The setting was licensed by Sword & Sorcery Studios (a subsidiary of White Wolf) and heavily revised for D20 Modern in 2003. This new edition recasts the apocalypse as a war among post-Singularity civilizations, a horrific spasm of nanotechnological and biological warfare (with a few nukes thrown in for old time's sake). The old creatures and robots are nearly all retained, but given new and detailed explanations that are designed to elicit horror and awe rather than cheap jokes.

Wizards of the Coast has since released a seventh edition of Gamma World, using the 4th edition Dungeons & Dragons rules, in October 2010. The game is far more humorous, from character creation, to Omega Tech descriptions. The 7th Edition setting is one where "the Big Mistake" merged all possible worlds into one, and really leaves the door open for player interpretation.

Gamma World is notable for one rather odd trend: usually, only a handful of books would be released before a new edition came out and rendered all the previous books obsolete. This reached its zenith with the Alternity version, which had only a single, core rulebook released before being discontinued. Time will tell if 7th Edition will continue this trend.

Tropes used in Gamma World include:
Retrieved from "https://allthetropes.org/w/index.php?title=Gamma_World&oldid=1930178"
Categories:
Cookies help us deliver our services. By using our services, you agree to our use of cookies.