Everything About Fiction You Never Wanted to Know.
(Redirected from Gash Bell)
Jump to navigation Jump to search 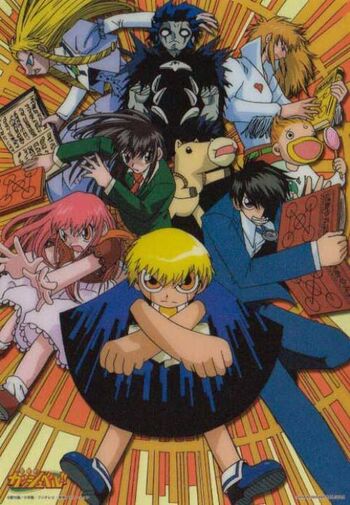 A manga created by Makoto Raiku, this series is a very unusual take on the Mon genre, in that the "mons" of this series are for the most part, super powered children with a human "owner". One hundred demon children (mamono in the original Japanese, called "mamodo" in the English release) are sent to earth to do battle with each other to find out who will be the next generation's King of Demons. The catch is that they can only use their demon powers if they find a human to read spells out of their book. If their book is burned, they're banished back to the demon world and are out of the contest.

The show specifically features the adventures of the arrogant Japanese junior high school student, Kiyomaro Takamine (shortened to "Kiyo" in the English release), and his hyperactive mamono partner, Gash Bell (renamed Zatch). Together they decide to try to make Gash the Demon King, so he can rule over the demon world with kindness.

The series was later adapted into an 150-episode anime.

Tropes used in Zatch Bell! include:
Retrieved from "https://allthetropes.org/w/index.php?title=Zatch_Bell!&oldid=1753544"
Categories:
Cookies help us deliver our services. By using our services, you agree to our use of cookies.