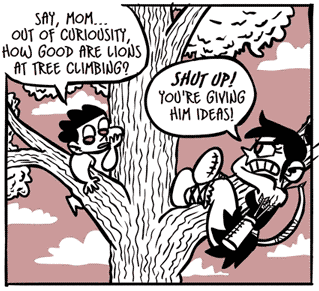 Q: Isn't your comic, in fact, historically inaccurate?
A: Look, 1400 BC was a really long time ago. Our historical and archaeological records of that time are dodgy at best and laughable at worst. You'll just have to take my word that this comic is the 100% true portrayal of what really happened.


Anyway, this comic is no less historically accurate than other serious illustrated documentaries like Asterix or Groo.
—The FAQ page

GastroPhobia is a webcomic by David McGuire, about the Amazonian exile and single mom Phobia; her precocious scamp of a son, Gastro; and her recently-acquired, listless slave Klepto. They have adventures in Ancient Greece.

The comic is a series of short stories; while there is continuity, there's little in the way of overarching plot.

Tropes used in Gastrophobia include:

Filby: What is wrong with you?! We travel back in time and you step on like a billion butterflies!
Nightsorrow: I did a lot more than step on that butterfly, if you know what I mean.

Originally I planned to draw this scene with Gastro wearing a Loin Cloth, but I decided to spare everyone that sight.

Phobia: You know, some people whip their slaves for less than that.
Klepto: Phobia, it has been my goal to be whipped by an Amazon since I was thirteen.

Phobia: (smiling) And if you ever endanger my son again, I'll have to cut out one of your kidneys and force-feed it to you.