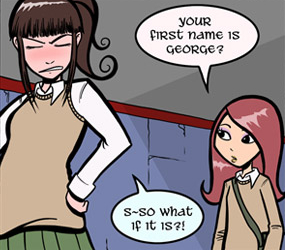 Her dad was a psychic who pre-ordered her birth certificate. He only got one thing wrong.

Most of the time, one can guess somebody's gender by reading his/her first name. Most first names have a well-defined gender, such as Alice or Robert.

Sometimes the only name you get is an ambiguous abbreviation, such as Sam. Or a gender-neutral name, such as Dominique or Claude in French. Or worse, a name whose "default gender" changes from a country to another (or even over time in the same country!), like "Andrea" which is typically female in the U.S. but typically male in Italy and Greece (And in Greek it means "manly"). And let's not forget the names that must be written down to determine the gender, such as Tony/Toni or Francis/Frances.

Titles and initials can be misleading too, since many are assumed to be male.

... And last, there are names which have no cultural ambiguity, but were chosen for the sole purpose of being the opposite gender. Usually played for laughs, but not always.

A frequent variation occurs when writers who Did Not Do the Research as to a foreign culture's naming conventions inadvertently gives a woman a masculine name or (less commonly) a man a feminine name. Russian characters are particularly vulnerable to this.

If a character is fated to become a permanent Wholesome Crossdresser or the victim of a Gender Bender accident they will typically have had names like this, because Fate is just funny like that.

Tomboyish Name is a Sub-Trope.

Examples of Gender Blender Name include:

(some of these may not be homophones in certain accents)

Retrieved from "https://allthetropes.org/w/index.php?title=Gender_Blender_Name&oldid=1871570"
Categories:
Cookies help us deliver our services. By using our services, you agree to our use of cookies.