Clasp Your Hands If You Deceive

Everything About Fiction You Never Wanted to Know.
(Redirected from Gendo Pose)
Jump to navigation Jump to search 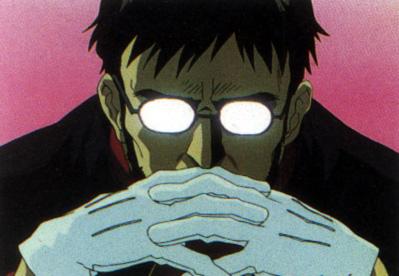 Particularly devious and magnificent villains have a habit of putting their hands together at around chest or mouth level, with fingers either interlocked or tip-to-tip (in which case it shouldn't be confused with Shy Finger-Twiddling).

One possible reason behind this gesture is that when a person lies, they often unconsciously cover their mouth with their hand (as if to prevent the lie from escaping their lips). Thus, putting both hands in front of your mouth means that you're lying big time. Another reason is that in Real Life body language, people tend to automatically steeple the hands when feeling overly confident, or superior to whoever they happen to be speaking to. Someone who does this too often will quickly come across as arrogant. But this pose has the advantage of completely blocking arms and chest, making their body language impossible to read anymore.[1]

The word usually used for this action in novels is "steepling".

A play on Clap Your Hands If You Believe. Bonus points if combined with ominous lighting, Scary Shiny Glasses, a slight Slouch of Villainy, a Beard of Evil or a Kubrick Stare. Double bonus for a Psychotic Smirk. Not related to Intertwined Fingers. Usually.

See Hand Rubbing for the poor man's version of this trope.

Examples of Clasp Your Hands If You Deceive include: