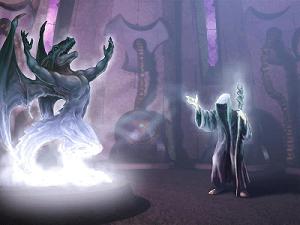 You cannot unring a bell.

A series of five Role-Playing Games for Mac OS and Windows by Spiderweb Software, which is more or less the brainchild of Seattle-area programmer Jeff Vogel. The games revolve around Shaping—the most prominent form of magic in the game world—used to make creations that, in theory, obey their creators absolutely. The masters of Shaping—Shapers—have absolute control over the known world. Occasionally, a creation will go rogue, but the majority seem to be happy with their lot. Naturally, it all Goes Horribly Wrong.

In the first game of the series, the player is a new recruit sent away to finish their training. Instead, they wind up on Sucia Island, which was abandoned two centuries ago and declared Barred by the Shapers. The player must then decide how to respond to all the creations living outside of Shaper control and forbidden technology lying around. In the second game, the player starts out as an apprentice Shaper who discovers that the forbidden technology and independent creations have secretly found a foothold on the mainland. Each subsequent game follows the attempts of human and creation rebels to overthrow the Shapers and the attempts of the Shapers to regain their old level of control. In every game, the war and chaos escalates.

It can be purchased at the official website, here. The series is also available for sale on Steam.

Tropes used in Geneforge include:
Retrieved from "https://allthetropes.org/w/index.php?title=Geneforge&oldid=1897144"
Categories:
Cookies help us deliver our services. By using our services, you agree to our use of cookies.