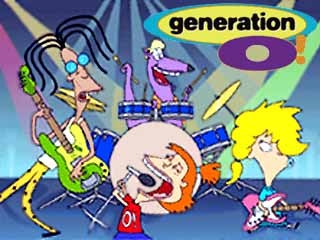 Generation O! was a cartoon from 2000-2001 about the life of a popular eight year old rock star named Molly O! (Yes, with the exclamation mark. It's her actual surname.)

Most episodes dealt with the fact that, despite being famous and acclaimed, she was still a child who had to obey her parents and follow the rules, much to her displeasure; and her struggles to fit in in school. ("What, your ears aren't pierced? Doesn't matter if you're a rock star. You are a Loooser!")

Tropes used in Generation O! include:
Retrieved from "https://allthetropes.org/w/index.php?title=Generation_O!&oldid=1478654"
Categories:
Cookies help us deliver our services. By using our services, you agree to our use of cookies.