Genie in a Bottle 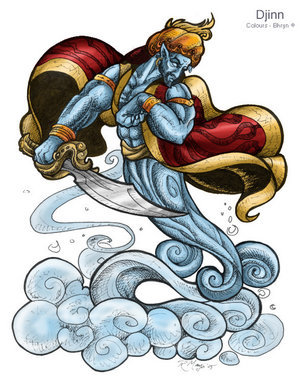 "What wouldst thou have? I am ready to obey thee as thy slave, and the slave of all those who have that lamp in their hands; I and the other slaves of the lamp."

In Arabic tales, most popularized in the west in the book 1001 Tales of the Arabian Nights, the djinn were a variety of spiritual species, somewhere in between Angels and mankind, capable of great acts, both good and evil. Some of the greatest magicians in Arabic lore were able to capture djinn to their service, and tied them to items such as lamps or rings. Usually Djinn didn't have to give wishes to whoever helped them; if they did, it would be out of gratitude. Some Djinn get impatient and settle for just leaving if freed, or killing/tormenting whatever stupid human releases them. Also originally the wish was simply the djinn using their incredible powers. If their master wished for a castle, they built one. It may just take seconds because of the Genie's mystical powers and servants, but he still directly did the task. If they wanted money, the genie pulled it out of their own coffers; a human's mind being unable to comprehend how much they had.

Much of this has been lost in the modern depiction of the Genie in the Bottle. In television, they are most often within brass oil lamps, of a type that is no longer used. Most Western viewers (but not the Genre Blind characters) upon seeing this kind of lamp would immediately associate it with a genie.

They are summoned from the lamp via rubbing and offer to grant wishes unto the person who freed them. These wishes can be anything (although some give rule-based limitations). A Benevolent Genie will attempt to fulfill the spirit of the Master's wish. A malevolent genie will be a Literal Genie or worse, a Jackass Genie, and will fulfill the worst possible interpretation. Typically, genies who do their best to follow their master's true wish will tend to fall into the hands of villains who will exploit them egregiously.

Most Genies often have a rule that they can only give their master Three Wishes (and ixnay on the wishing for more wishes!). If this is the case, expect a none-too-bright master to waste the first one or two on pointless fripperies before learning their lesson and using the third to make some meaningful change to their lives.

The modern depiction of the Genie in a Bottle seems to indicate that the lamp is in fact the source of the Genie's power. Without it, he or she is either weakened or turned human. However, the Lamp is also their prison. They must give wishes to whoever rubs their lamp, and cannot resist. They also cannot directly harm their master. See Literal Genie, however, for passive-aggressive means of rebellion; and Jackass Genie for less passive means.

This association of "genie" with "slave" means that we don't, generally, see free genies anymore, and that the intrinsic nature of genie "slavery" can be used as a plot point, as in Disney's Aladdin (You wished to be an all-powerful genie? Now you're stuck in that lamp!). Given the U.S.'s history with slavery, Western depictions of heroes who acquire genies will almost always free them in the end (provided that they're good). What the genie was imprisoned for originally is typically not mentioned.

Another interesting change is how the nature of wishing has become a kind of reality warp. The genie activates some kind of command written into the fabric of existence, and *poof*, the universe is that way. Just as a Genie is slave to the Lamp, the Wish seems to be something more complicated and powerful than they themselves are; they just facilitate its invocation. While they may have some magic tricks they can use for themselves, they cannot consciously use the same powers the Wish facilitates.

Since Genies are usually Shapeshifters, they usually also have a Red Right Hand such as blue skin, Eyes of Gold, appearing in a puff of smoke or some other feature that distinguishes them in any form. While today's image of a genie is fairly standardized and stereotypically Middle Eastern—a muscular, shirtless man, without legs, in a turban and usually with an ornate Arabic sword—this kind of standard visual preconceptions only seems to have arisen during the twentieth century; earlier depictions of genies by Western artists are very varying.

The djinn were originally spirits of dust devils, hence the term, and almost Exclusively Evil in the oldest stories. Whenever you see a dust devil, that is a genie in its natural element. In the desert of the Sahara, or the plains of West Texas, dust devils can be powerful enough to snatch up livestock and small children, and those swirling leaves tend to follow you around, hence the origin of the belief isn't as illogical as you might think.

This one is well enough known that Christina Aguilera's first song was called "Genie In A Bottle" and featured many (somewhat sexual) references to this trope. Do not confuse with Bottle Fairy.

Examples of Genie in a Bottle include:

Retrieved from "https://allthetropes.org/w/index.php?title=Genie_in_a_Bottle&oldid=1635497"
Categories:
Cookies help us deliver our services. By using our services, you agree to our use of cookies.