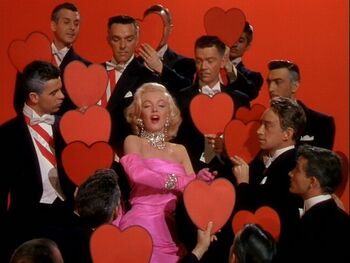 Diamonds are a girl's best friend...

Gentlemen Prefer Blondes was a 1925 novel written by Anita Loos. It was adapted into a Broadway musical in 1949; the songs (written by Jule Styne and Leo Robin) included "Little Rock" and "Diamonds Are A Girl's Best Friend." The musical version was adapted into a movie in 1953, starring Jane Russell and Marilyn Monroe. (An earlier silent movie version is lost.) A semi-sequel, Gentlemen Marry Brunettes, was released a couple of years later starring Russell and Jeanne Crain; it didn't do nearly as well as the first movie.

The story follows two showgirls, and best friends, Dorothy Shaw (Jane Russell) and Lorelei Lee (Marilyn Monroe). As it starts off Lorelei and her fiance, Gus Esmond, were going to travel to France in order to get married. However, since Gus's father, Edmond Sr., disapproves of Lorelei, he prevents them from going. Despite this, she decides to go anyway, taking Dorothy along with her. Before their trip, Gus tells Lorelei to behave herself while in France or his father might find out and prevent their marriage from even happening. This is not untrue as the old man has hired a detective, by the name of Ernie Malone, to watch her every move.

While on the boat to Paris, Lorelei meets Sir Francis "Piggy" Beekman, owner of a diamond mine. Intrigued by him, she invites him back to the girls' cabin to flirt with him. Unbeknownst to them, however, Ernie spies on and takes pictures of them. Dorothy, who Ernie is falling for, sees him and tells Lorelei. They concoct a scheme to take the film by drugging the detective and stealing it from him. However, their troubles are not over yet as the two girls soon run into money problems...

Lorelei: Excuse me, but what is the way to Europe, France?
Dorothy: Honey, France is in Europe.
Lorelei: Well, who said it wasn't?
Dorothy: Well... you wouldn't say you wanted to go to North America, Mexico.
Lorelei: If that's where I wanted to go, I would.