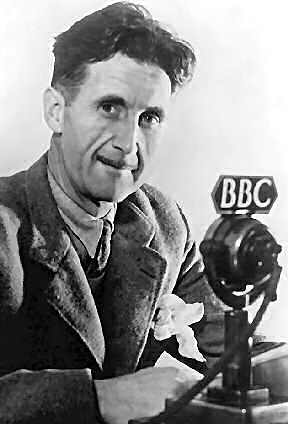 George Orwell reporting for the Ministry of Tru... I mean the BBC

Real name Eric Blair, George Orwell (1903-1950) was the one of the most influential authors in the English language.

A socialist all his life, but his views changed somewhat over time and his dislike of Soviet communism was very clear. Orwell, a journalist, participated in the Spanish Civil War on the side of the Republicans, serving in the party militia of the P.O.U.M. or Party of Marxist Worker's Unification [1], and even got shot in the throat (an experience that he would go on to describe as "interesting"). His works tend to be considered cynical. The term "Orwellian" is named after his famous works of dystopian fiction, particularly Nineteen Eighty-Four.