Everything About Fiction You Never Wanted to Know.
Jump to navigation Jump to search
/wiki/George Takeicreator 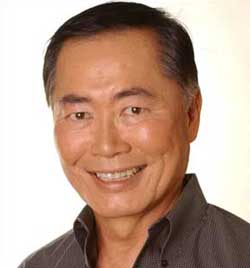 It's okay to be Takei!

George Hosato Takei was born in 1937 in California. During his childhood, he and his family were sent to World War II internment camps for Japanese Americans. It was there that young Takei's desire to act was born: the camp would screen Japanese movies for the internees, and there would be a single man off to the side of the projection screen providing an English dubbed voice for all the characters. Takei wanted to be that guy.

Returning to Los Angeles after this, Takei and his family endured residual hatred for Japanese-Americans that lingered after World War II; they also moved into a primarily Latino neighborhood, where Takei picked up fluency in Spanish. He would go on to minor in Latino studies in college.

In the 1960s he made appearances on shows like Mission: Impossible and The Twilight Zone. But it was his groundbreaking role as Hikaru Sulu on Star Trek that made him a cultural icon, as one of the first and only non-stereotypical Asian characters on mainstream American television. Reportedly every Asian-American actor wanted the role, since Sulu had no accent, didn't do martial arts, and was not a crude caricature (remember: this was more or less contemporary with the yellowface characters in Breakfast at Tiffany's and Charlie Chan). He would go on to portray Sulu in Star Trek: The Animated Series, in six subsequent Star Trek movies, and on Star Trek: Voyager. He also co-starred in an episode of the fan work Star Trek: Phase II.

After Star Trek, he ran for City Council in Los Angeles, losing by only about 1500 votes. However, his civic hopes were not in vain, as he would later be appointed to the board of directors of the Southern California Rapid Transit District.

In the 2000s, Takei gained new fame by appearing regularly on Howard Stern's radio show, giving birth to his own Memetic Mutation: "Ohhhhhh my." He also appeared as Hiro's dad on Heroes and voiced animated Asian characters such as the Fa ancestor from Mulan, a Fire nation jailor in Avatar: The Last Airbender, and the Asian-esque Master Yoketron, Prowl's cyber-ninja mentor, on Transformers Animated. Also, he played Emperor Yoshiro, leader of the Empire of the Rising Sun in Command & Conquer: Red Alert 3.

In 2006, he officially came out of the closet as a gay man, although many of his friends and family had long known this. In 2008, he married his partner of twenty years, journalist Brad Altman. Takei continues to be an advocate for civil rights, gay rights and Asian-American issues. In 2012, he starred in the musical Allegiance, which deals with World War II internment of Japanese Americans.

"I tell young people today, I broke that Asian driver stereotype decades ago by being the best helmsman in the galaxy."

My name is George Ta-kay. Not Ta-kai, as you've insisted on calling me for forty fucking years! George Ta-kaaayyyyy. Rhymes with toupeé.

"During the next few days, people walking past my dressing room may have wondered what sort of nefarious activity might be going on inside that was making the portable structure rock with such sensuous rhythm. Whatever wild imaginings they might have had, the truth was that I was pumping up the pectorals for my shirtless fencing scenes with a conscientious push-ups regimen."

"No person, let alone an elected school official, whatever their personal or religious beliefs, should ever wish death upon another human being. You apologised for your 'poor choice in words', but you are always going to be a total douchebag."