Get Him to The Greek 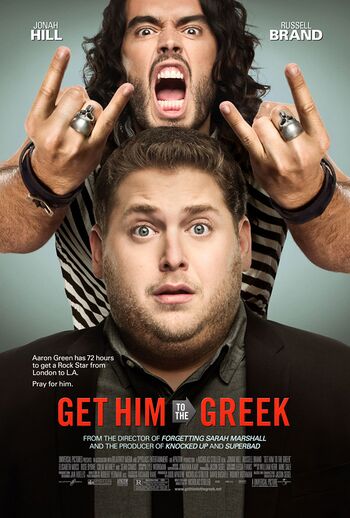 Jonah Hill is Aaron Green, a record company intern who has just been given the moment of a lifetime: Haul infamous Britrock libertine Aldous Snow to the States in time for his 10th Anniversary concert at L.A.'s prestigious Greek Theater. Considering Jonah Hill's character is a massive Aldous Snow fan, and all he has to do is escort the playboy, this gig shouldn't be too much of a hassle, right?

Wrong as a bombed album.

Get Him To The Greek is a Spin-Off movie for Russell Brand's Aldous Snow persona from Forgetting Sarah Marshall, a previous joint from Judd Apatow and Jason Segel. Expanding upon the former film's depiction, Brand hits upon every British rock star stereotype as often as Hill exemplifies the harried and harassed music industry newbie. In addition, P. Diddy appears as Sergio Roma, a lunatic record exec with a fondness for animal fur and six kids who all need Air Jordans.

Tropes used in Get Him to The Greek include:
Retrieved from "https://allthetropes.org/w/index.php?title=Get_Him_to_The_Greek&oldid=1505484"
Categories:
Cookies help us deliver our services. By using our services, you agree to our use of cookies.