Getting Crap Past the Radar/Anime and Manga 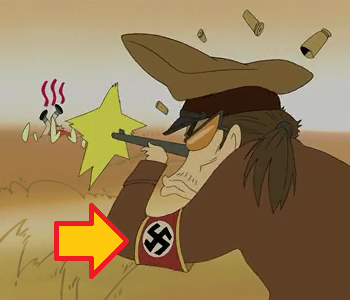 What demon sorcery allowed them to get THIS past the censors?!?

Please take Values Dissonance in mind, since Japan has a higher threshold on what's acceptable for kids.

Guido Anchovy: There once was a beauty named Lucille, whose pretty puss could make a pussycat reel.

Alexis: Well, you haven't grown up too much.
Pierre: My! You have.

Chazz: You're the aces of my deck!
Ojama Black: Did you say...
Ojama Green: "Aces"?
Ojama Yellow: That really hurts, boss! Aren't you tired of insulting us?

Chumley: C'mon! You don't think Dorothy pulls that off?
Syrus: Pull it off? Don't put that image into my brain, please Chum!

Austria: That was sad. My vital regions, forcefully seized by Prussia...
Empress Marie Therese: ... That sounded kind of lewd, you know.

Austria: Prussia has occupied my vital regions! Summon the soldiers! They must be retaken immediately!
Empress Maria Theresa: Er, there are more decent expressions for it...

Knuckles: Tails! Get off!
Tails: I so sawwy! I'm so sorry!
Knuckles: I never thought you'd stoop so low!

Momo: He must be following her!

Yosuke: No! I could lose something I'm not ready to yet!

Back to Getting Crap Past the Radar