Getting Crap Past the Radar/Film 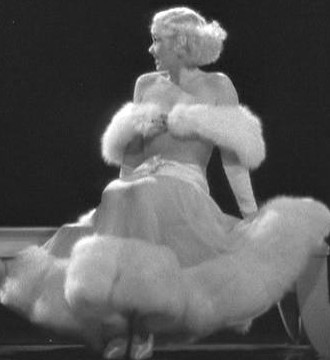 It's just a Pimped-Out Dress? Look closer. The wrap is all that is covering her torso. This was Pre-Code Hollywood.

Moriarty: The needle to the last, eh, Holmes?

"If you want me, just dial. You know how to dial, don't you? You just put your finger in the hole and make tiny little circles..."

Norma: He always liked fires... and poking at them with sticks.

Joe: Strange city, San Francisco. When I bought the pumps, the cashier asked if I wanted them wrapped... Or, if I wanted to wear them.

Morgan: And you don't wanna wear too much make-up, because then boys get the wrong idea... and you know they're only after one thing!
Giselle: What's that?
Morgan: ... I don't know. Nobody will tell me.

"I read you were shot three times in the tabloids."
"That's not true. They didn't get anywhere near my tabloids."

Blaine: How did you get in here? You're under age.
Annina: I came with Captain Renault.
Blaine: (rolling his eyes) I should have known.
Annina: My husband is with me, too.
Blaine: He is? Well, Captain Renault's getting broadminded.

Daniel: (dressed as an old Jewish lady) Oy, it was such a shandeh. I should never buy gribenes from a mohel. It's so chewy.

Gribenes, a byproduct of the preparation of schmaltz, are crisp chicken or goose skin cracklings with fried onions, a kosher food somewhat similar to pork rinds. And a mohel is, well, the man who performs the Jewish ritual of circumcision. In other words...

Daphne: I can't get married in your mother's dress! She and I ... er ... we are not built the same way.
Osgood: We can have it altered.
Daphne: (visibly flinching) Oh, no you don't!

Frank: The same idiots were passing the same rumors when I was your age, but if all the girls did, how come I always ended up with the ones who didn't?
Colleen: But it's all different now!
Frank: I don't know, they wrote Fanny Hill in 1742 and they haven't found anything new since.
Colleen: Who's Fanny Hill?
Frank: Go to bed, that's who Fanny Hill is.

Matilda: It's a lovely book, actually. It's called Moby Dick.
Harry (her dad): Moby what?

Trunchbull: You didn't like the Chokey, did you? Thought you'd pay me back, didn't you? Well, I'll pay you back, young lady!
Matilda: For what, Miss Trunchbull?
Trunchbull: For this newt, you pissworm!!

I ate some bugs, I ate some grass
I used my hand to wipe my... tears

Crystal Allen: There is a name for you, ladies, but it isn't used in high society... outside of a kennel.

Krauss: Stay fockyoused on your job!
Hellboy: Oh, that word -- "fock-yoused"? Yeah, with your accent, I wouldn't use it that much.

"She's so sweet during the day but at night she turns into a holy terror."
"You know, I could say the same thing about you."