Getting Crap Past the Radar/Literature 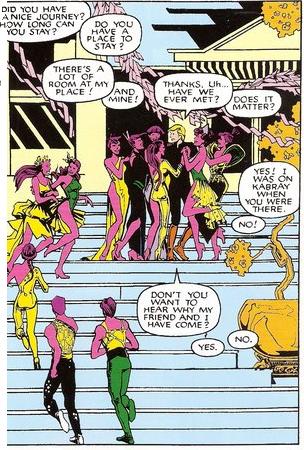 The Toad: Oh, croap!
Tiffany: Pardon?
The Toad: Er, that was, er, swearing in Toad.

Oakheart (to Crookedjaw): What are you so cheerful about? Have you been dreaming about Willowpaw?

Saphira? he asked.
Do you know another such as me?
Of course not. You just surprised me. I am... ah, somewhat occupied at the moment.
She studied the color of his emotions, as well as those of Katrina, and was amused by her findings.

"As Mary said that, Lyra felt something strange happen to her body. She found a stirring at the roots of her hair: she found herself breathing faster. She had never been on a roller-coaster, or anything like one, but if she had, she would have recognized the sensations in her breast: they were exciting and frightening at the same time, and she had not the slightest idea why. The sensation continued, and deepened, and changed, as more parts of her body found themselves affected too. She felt as if she had been handed the key to a great house she hadn't known was there, a house that was somehow inside her, and as she turned the key, deep in the darkness of the building she felt other doors opening too, and lights coming on. She sat trembling, hugging her knees, hardly daring to breathe, as Mary went on."