Getting Crap Past the Radar/Live Action TV 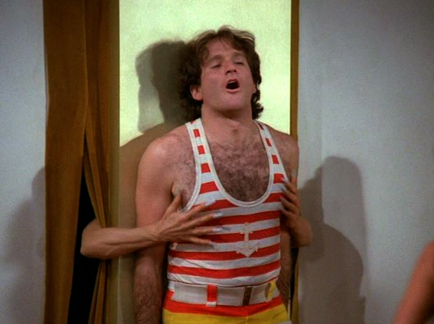 "The Fruit Fucker made his prime-time television debut last Monday. Our friend Wil Wheaton was on Big Bang Theory sporting the FF shirt. I'd love to know what he told people when they asked him what was on his shirt. I'm guessing it wasn't "a fruit rapist.""
—Gabe, Penny Arcade

While Mork and Mindy (or rather, its star) may be the Trope Namer, Getting Crap Past the Radar has been going on ever since the beginning of television and is unlikely to stop as long as the censors are around, writers willing to mock them by letting the crap slip by them, and viewers who notice and put the instances on this website.

Michael Palin: * All are starving in a lifeboat* Still no sign of land...how long is it?
Graham Chapman: That's a rather personal question, sir!

Rom: I forgot my bi-monthly ear scan. And besides, I've probably been getting too much oo-mox.
Leeta: Who's the lucky girl?
Rom: (sheepishly) Uhh, no female. Just me.

Veronica: They give trophies for stealing hubcaps now?
Weevil: What is this, The Seventies? Rims, baby.
Veronica: So you got a trophy for a rim job?
(later, in the same scene)
Veronica: Finally, a deep throat to call my own!

Troy: Flat?
Veronica: Just as God made me.

Logan: (to a bathrobe-clad Charisma Carpenter) Can Dick and Beaver come out to play?

Hyde: I can't believe they're gonna waste all their money on a stupid disco when they could buy a really big bag of *Looks at Red* ...caramels..."

Kitty: I put some sandwiches in your duffel bag. Now, umm, why do you need such a big bag of oregano?
Eric: Donna's...Italian...?

Fred: Don't let it go to your head.
Gunn: That's not the direction it's flowing. (kiss)

Wesley: (watching her stake two vampires) Feel natural?
Faith: Like riding a biker.
(on arrival at the hotel)
Faith: I hear you're a good fighter.
Gunn: I hold my own.
Faith: Shame.

Frank: They knew what a Hot Richard was?

Wilson: Where did you get those keys?
House: Blue the janitor.
Wilson: What?
House: That's his name.
Wilson: His name is Lou.
House: I owe him an apology.

House: I'd like to start with a small. Tossed. Salad.
Cuddy: As of this morning, I'm on a diet.

Keely: What in the world are two teenagers going to do in a dark room alone with no adults?
(cue shocked look.)

The Janitor: What? (hides crossword puzzle)

The Janitor: We all did.

Jordan: One of the reasons I divorced Perry was because of his last name.

The Todd: Greatest conversation ever.

JD: Oh no. We got a glitch. Abort the plan! Abort the surprise! Abort the babies! (pops baby-shaped balloon, turns and sees a priest staring at him in shock) EVERYBODY RUN!!

Michael: Get rid of the Seaward.

Tobias: I think I just blue myself.

Tobias: I'm afraid I prematurely shot my wad on what was supposed to be a dry run if you will, so I'm afraid I have something of a mess on my hands. (talking about using a spa package)

Michael: There's so many poorly chosen words in that sentence.

"I'd like to thank Laura Hall, our pianist, for having a profession I can say on the air and the censors can do nothing about. Pianist. Pianist, pianist, pianist. I've never seen such a beautiful pianist."

Louis Schatz: I choked on a tongue!

Emerson: Yours or someone else's?

Jon Stewart: (picture of rooster appears on screen) So clearly, California voters are still amenable to some [bleep].

Jon Stewart: If something goes wrong, there will be an explosion of hot Qum!

In Gamera Vs. Zigra when the zigra woman says where she is from Celestial Body 105 or something they say "I know!" really loudly and the line Space is curved is answered to "And so am I".

Mother: I just don't want you to be disappointed if he doesn't come.

Eva: Are you coming, or do I swim alone?

Once a lady's been introduced to Colonel Angus, she'll settle for nothing less!

Male visitor: Can I try soaking corks too?

Foreman: You look like you've soaked a few corks yourself!

Drake: (grabs bottle of sunblock and sprays it over the guy's face)

Chandler: Yeah, I think kissing is, for us, like an opening act. You know, like the comedian you have to sit through before Pink Floyd comes out.

Rachel: Okay. Now this is just the first chapter, and I want your absolute honest opinion. Oh, oh, and on page two, he's not 'reaching for her heaving beasts'.

Joey: You usually find them on the 'heaving beasts'.

Rachel: Alright, alright, so I'm not a great typist...

Ross: Wait, did you get to the part about his 'huge throbbing pens'? Tell ya, you don't wanna be around when he starts writing with those!

Rachel: Yes Ross, my wind. How do expect me to grow if you won't let me blow?

Monica: Get out before they go down, that's my motto.

Joey: That is so not my motto.

Joey: My uncle Sal has a really big tongue.

Chandler: Is he the one with the beautiful wife? (Joey nods)

Rachel: So wait, this guy goes down for like two years at a time?

(Chandler groans in frustration, as his mouth is stuffed with food and he's unable to make a joke)

Monica: That'll teach you to lick my muffin.

(An even more frustrated reaction from Chandler)

Monica: Well, it turns out that Erica didn't pay much attention in Sex Ed class, because the thing she did with that prison guy...it'd be pretty hard to make a baby that way.

Chandler: Oh God! What was it? The thing that we hardly ever do or the thing we never do?

Monica: The thing we never do.

Monica: (entering to Central Perk) Guys! Guys! I just saw two people having sex in a car right outside.

Phoebe: It's okay. Actually y'know what, it's kinda cool. 'Cause it's like y'know, one life ends and another begins.

Monica: Not the way they're doing it.

Monica: That one's not dirty.

Chandler: It is when you combine it with that one.

Monica: Well, if you don't erase this, you won't be getting one of those from me!

Rachel: Chandler, can I borrow your tape measure?

Chandler: It's in the bedroom.

Coach Kreeton: And even though I'm a seventy-five, and you're NINETEEN! AHAAAAAAAAHAHA!

Anderson Cooper: It's hard to talk when you're teabagging.

Ms Tuttweiler: Well, at least one of us got to finish!

"I remember you! I ate cake off you!"

Ted: Hey Barney, do you want my X-Box?

Barney: (terrified) TED, SHE HAS A NAME!

Bar This is our last night together as "bros". Tonight, we are having a no-holds-barred celebration of bro-hood. A bro-ing away party. A bro-lebration! A bro-choice rally! Bro-time at the Apollo!

Lassiter: You couldn't beat me on the field, so now you're going to try to beat me off?

Shawn: You might want to think about rephrasing that.

Lionel: Too busy playing with swords to speak to your father?

Tim: I remember when England's hills were green...but look at it now...scarred! Defaced! ...Raped!

[Graeme and Bill frantically cover his mouth with fervent cries of "watch it!"]

Chuck: Marie Antoinette. Blair's favorite role-play. And I was always eating her cake.

Georgina: Blair locked me out. And judging by the size of the sock on the doorknob I didn't want to knock.

Gomez (about the new neighbors): It's our turn now. They won't see US for three days.

Mr. Monroe: You can be the alternative family!

Cookie: Do you think that Lisa Zemo is hot?

Gene Hunt: A foursome! It's all your Christmases come at once.

Al: She's the producer, and I don't think she wants to do another show about sheetrock.

Tim: I don't give a sheetrock what she wants, I—

Dewey: Hey! Watch how you pronounce that. It might not fly on television.

Richard Roeper: ...this is also a very sexy movie--I'm sorry, when Kate Beckinsdale's in a swimming pool with Frances McDormand, it's got my attention.

Richard Roeper: And it grows organically out of the story; it's not just a gimmick.

Roger Ebert: Something may grow organically, but I don't think it comes out of the story.

Mulder: About the guy's plumbing?

Mulder: That's funny, I remember a couple of Catholic school girls that were experts at it.

Michael: My contact is Packer... Todd F. Packer. You know what the 'F' stands for?

Jeff: I don't suppose there's anything on that rack for me?

Shawn: Remember in health class that section on the movement of blood? I understand it now.

Shawn: Why don't you come over tonight? We can skateboard in the pool, and they got cable."

Cory: We got cable.

Clyde: I have never been so glad to see a full stop.

"I'm not very good with getting girlfriends. I was in a relationship once, but she soon cut it off."

"(aside to the audience) That'll be why he hadn't much luck with the girls since then."