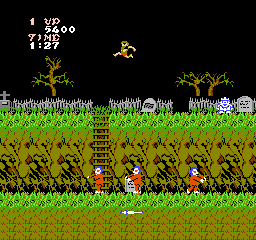 Ghosts 'n Goblins (known in Japan as Makaimura, "Demon World Village") is Capcom's infamously Nintendo Hard Action Game platformer from the 8-bit era that pits intrepid Knight In (and occasionally Out Of) Shining Armor Arthur against endless hordes of undead, demons, Goddamned Bats, and the titular ghosts and goblins in a quest to save his sweetie, Princess Prin-Prin, with only two Hit Points to his name. As with a great many games of its time, its first appearance was in arcades, followed by ports to home platforms, including the ZX Spectrum, Commodore 64, Commodore Amiga, and NES. Later on, it appeared in updated form on the Game Boy Color, Game Boy Advance, and PlayStation, and in 2007 was released on the Wii Virtual Console.

The game received sequels in Ghouls 'n Ghosts (Daimakaimura in Japan) for arcades and the Sega Genesis, Super Ghouls 'n Ghosts for the SNES, Makaimura for Wonderswan (yes that's really its title), Ultimate Ghosts 'n Goblins for the PSP, and Ghosts'n Goblins: Gold Knights for the iOS. Also inspired a separate series comprised of Gargoyle's Quest for the Game Boy, Gargoyle's Quest II for the NES, and Demon's Crest for the SNES.

Compare the Maximo series, which is a spiritual successor/spin-off.

Arthur himself has made an out-series appearances in Namco X Capcom, as well as the Marvel vs. Capcom series (Assist Character in the first game, then full-blown playable in the third) The Red Arremer is also a Bonus Boss (AND HOW!) in SNK vs. Capcom SVC Chaos. Red Arremer (Firebrand From Gargoyle's quest) was added in the Updated Rerelease, Ultimate Marvel vs. Capcom 3, where he has special dialogue with Arthur.

Tropes used in Ghosts 'n Goblins include:
Retrieved from "https://allthetropes.org/w/index.php?title=Ghosts_%27n_Goblins&oldid=1699963"
Categories:
Cookies help us deliver our services. By using our services, you agree to our use of cookies.