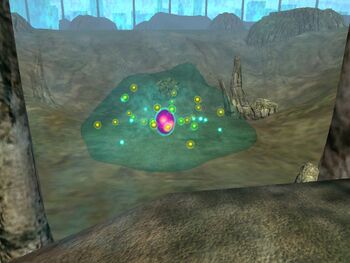 You're gonna need a cold pill the size of Manhattan to cure that.

They cause diseases and you can never truly escape from them. So it is only natural that the creators of media exaggerate bacteria to make them seem even scarier than they need to be. Due to a lot of regular bacteria looking like ovals and other basic shapes, many forms of media also make germs look like actual monsters which, due to how disgusting germs can be in Real Life, can lead to potential Nightmare Fuel. Many times these creatures are represented as amoeba-like Blob Monsters.

Given that the Media is the Media, expect to see all other manner of microorganisms or even parts of the human immune system similarly depicted.[1]

There are four main types of larger than life germs:

1. A germ that is a Attack of the 50-Foot Whatever kind of creature that smashes buildings and the like.

2. The second kind is usually as small as as a dog, but can be troublesome, becoming a Cute Bruiser, a Team Pet (if it decides to join the hero), or an Adorable Evil Minion (if it is controlled by a villain).

3. "Good germs"; these are usually medicine or some kind of bacteria that can combat the other, more evil germs. these are sometimes more humanoid than evil germs, and are also usually seen in a Fantastic Voyage Plot -like setting.

4. Germs that in-universe are, in fact, as small as real life germs are. These, like the good germs, are usually involved in a Fantastic Voyage Plot and are usually the reason the protagonist venture into another body in the first place. many times they are more inhuman-like and can merge with the second kind of germ-type, but are usually bigger than the hero.

Remember: Giant Germs aren't necessarily evil, they just need to be big enough to interact with other characters.

Examples of Giant Germs include:

It isn't easy working in the Muppet Laboratories.
So maybe you could help me with this giant germ.
Would it kill you? Okay, maybe.
Germ enlarger seemed like a good plan.
Beaker thought so, now it's got his head...

Chappy: It was huge!
Tatanya: Like this? (Pictures a building-sized plankton screeching "RAR!")
Chappy: ...for a plankton. (Pictures himself grasping that same plankton, now about the size of an apple, and saying "I have u now!")