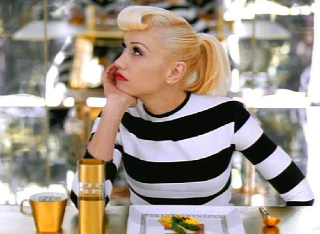 Gwen Stefani is dreaming of being free from this 24 karat prison.

We are honored to entertain your presence, and hope you enjoy your stay. Your patron has given us instructions to host you, and has also given us to understand that you are 1) a prominent noble in line to the throne, 2) in possession of sensitive state secrets, 3) a beautiful young lady he means to woo, or 4) another upstanding person of import. Rest assured, we will treat you with the very best care by keeping your presence here a complete secret, even to friends, family, and your government.

Your room is the Presidential Suite, our most lavish accommodation. It comes with a fully stocked kitchen and team of chefs, entertainment rooms, library, indoor pool, solarium, Swedish massage and spa room and bowling alley. We are sure you will find it delightful. The Gilded Cage resort itself also has a first class restaurant, the "MacGuffin Girl", where you can dine with your patron and your fellow guest, Mr. Bond. We urge you to eat. We also boast a ballroom, and regularly host the Damsel Ball for guests who enjoy dancing.

Because We Care about your safety, we have provided 24 hour, full week Elite ninja bodyguard coverage, camera surveillance of every area, titanium reinforced walls and airlocks with Novichok gas dispensers, automated 30mm Gatling gun turrets mounted on walls, sniper-protected guard towers, a fleet of interceptor aircraft ready to scramble and radar-homing surface-to-air missiles with electro-optical backup guidance systems around the resort's perimeter. But don't let our ominous and imposing staff and defenses worry you, they will in no way inconvenience you. All our staff, from maids to Mooks, have been "re-trained" to never speak to you, and since you will never need it, there will be no news of the outside world.

As part of our care package you get a fruit basket, evening wear, and this matching gold chain and GPS tracking manacle which we insist you wear. For your safety, of course.

The best part? You don't need to worry about the bill or checking out! Ever. Or until your parents or patron decide you can leave.

If there is anything you need, no matter the time, please let us know and one of our staff will see to your request.

P.S. For other resorts in our chain, please consider visiting the Luxury Prison Suite, Locked Away in a Monastery, and Fantastic Nature Reserve.

Examples of Gilded Cage include:

Retrieved from "https://allthetropes.org/w/index.php?title=Gilded_Cage&oldid=1872254"
Categories:
Cookies help us deliver our services. By using our services, you agree to our use of cookies.