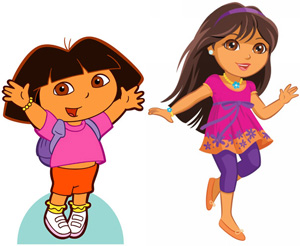 Our heroine is a Tomboy—rough and tumble, as interested in fashion as she is interested in watching paint dry. However, in the reboot or in the doll, she becomes a girly girl. Often complete with princess dress or at least a Pimped-Out Dress, tween fashion and long hair, often with hair decorations.

Notice that the girl is often aged up—from little girl to tween. (Ironically, tweens are often less feminine than little girls—tweens are at the stage of life where the dresses and cuteness is ditched for a more mature style.)

Compare/contrast Fan Service Pack. See also Chickification. Also unlike Chickification, this trope doesn't necessarily mean she becomes weaker. The trick is that the girl becomes more dainty-looking, but keeps at least a good part of her core personality underneath the skirts and make-up. If becoming girlier is portrayed as better or worse than being more tomboyish, then you've got some Unfortunate Implications on your hand.

Examples of Girliness Upgrade include: