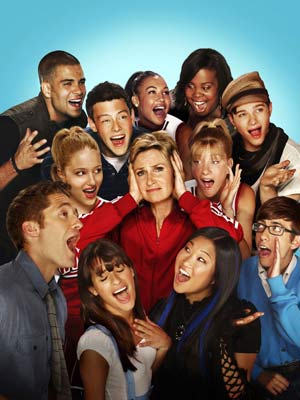 What happens when you pump High School Musical full of antidepressants? You get Glee, where every episode is the Musical Episode!

Glee is the story of a high school teacher's attempts to organize his small public school's show choir while dealing with his personal issues and the torrid personal lives of his students. The first episode alone features music from such disparate sources as Guys and Dolls and Journey, and the show goes on to showcase everything from Charlie Chaplin to Lady Gaga.

The musical numbers are usually given an in-universe justification with the activities of the Glee club, instead of seemingly springing fully formed from the minds of characters in normal situations, as with most musicals. That Reminds Me of a Song is in full effect here. From time to time, an individual does just break into a full-on song and dance sequence with back-up dancers and props and so forth, and it cuts from location to location mid-stream (just like a music video); based on contextual clues, these moments appear to be taking place at least partially in the individual's thoughts.

Tons of character stereotypes show up (arguably on purpose) to the point of reviving a few Dead Horse Tropes.

Although the first half of Season 1 was well received and put all of its main cast in the spotlight, Glee became one of Fox's most divisive shows. This was helped by the fact that before the first season was finished it was renewed for both a second and third season, both with 22 episodes. A fourth 22-episode season was ordered for 2012. The show finished its fifth season, as part of another double renewal deal. It was later confirmed by Ryan Murphy that the sixth season would be the final season, and it ended on March 20, 2015 after six seasons and 121 episodes.

The series had a Fake Crossover with the Archie universe in Archie Meets Glee. It also spawned a British singing contest called Don't Stop Believing (yes, with the 'g') that lasted six episodes in summer 2010, was won by the only team who sang Barbra Streisand, and has never been mentioned since.

Please note that The Glee Project has its own page, so don't put examples from that here.

Tropes used in Glee include:

Retrieved from "https://allthetropes.org/w/index.php?title=Glee&oldid=1945482"
Categories:
Cookies help us deliver our services. By using our services, you agree to our use of cookies.