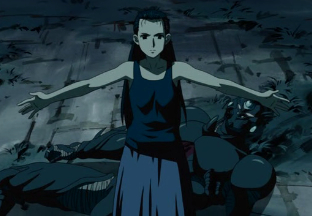 If you want to kill this poor, defenseless, super strong, laser shooting, regenerating, armored bishie, you'll have to go through me! Yeah, didn't think so.

Inspector Javert catches up. The Mecha-Mooks drop in. The Big Bad incapacitates the hero, and starts to move in for the kill...

...Only to be stopped when another, weaker character throws themselves in front of the hero, crying "If you want him, you'll have to go through me!"

The defender may expect the attacker to be stopped by this, or may expect they'll have to fight. The attacker also has options. In some cases, the attacker doesn't really care what happens to the defender, and is perfectly happy to "go through" him or her to get to the hero. In others, the attacker is somehow close to the intervening character, and will stop, if only to find out why he's been betrayed (this makes the Mad Scientist's Beautiful Daughter a common participant in this trope). Usually, the defender is hoping their magnificent show of Friendship or Love will faze them into reconsidering. It very rarely does. Failing that, they may just be stalling for The Cavalry to arrive.

Occasionally, a whole group of characters will jump between the target and the attacker, and the attacker will either back off, intimidated by these numbers or, (if he's a Villain with Good Publicity, having underestimated the hero's popularity versus his own) simply make an incredibly impressive Foe-Tossing Charge.

Unfortunately, what works for the hero can work for the villain, too, and if the Big Bad has a Brainwashed victim or Face Heel Turn-er around that the hero is unwilling to "go through," they can put The Messiah in a very tight spot. Don't try this on an Anti-Hero, though—you can't be sure they won't Shoot the Dog. In fact, don't try this on any hero with a gun, because they'll always find a way to slip a bullet past the victim's head and into yours.

A particularly powerful or numerous enemy in this situation usually leads to a You Shall Not Pass situation. If the defender is so powerful there's a good possibility they'll go through the person being challenged, it's I Am Your Opponent.

If this is said to (or by!) the Intangible Man, expect hilarity to ensue as he, she or it is very likely to act as a Literal Genie. Also in a rare, horror situation, expect the recipient to literally tear the speaker in half and go through.

See also: Protected by a Child, I Am Spartacus, sometimes used as a sneakier way to protect the hero. Contrast Pietà Plagiarism, Crucified Hero Shot. Liable to Threat Backfire.

Examples of Go Through Me include: