Everything About Fiction You Never Wanted to Know.
(Redirected from God Eater)
Jump to navigation Jump to search 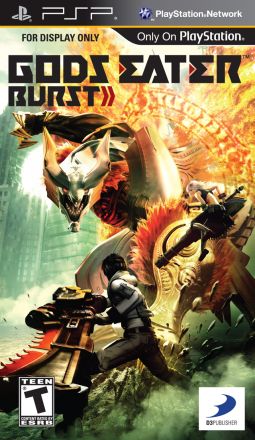 Gods Eater Burst is a PSP action-adventure game developed by Shift and published by Namco Bandai. Originally released in Japan as God Eater in February 2010, it received an Updated Rerelease in October and localized for North America and Europe by D3 Publisher under the name Gods Eater Burst on March 2011, sporting new missions and items, as well as various gameplay tweaks and balances.

The gameplay is similar to Capcom's Monster Hunter series in that it revolves around teams of up to four slaying gigantic monsters and using the loot found to create new weapons, but it carries the distinction of having an actual plot, being much faster, and having several gameplay differences.

Set in a post-apocalyptic world where monsters known as Aragami have destroyed nearly everything and pushed humanity to the brink of extinction, the player becomes a Gods Eater for the Fenrir Corporation, one who hunts Aragami using the God Arc, the only weapon proven to be effective against them. Along with your fellow Gods Eaters, you fight to survive and perhaps in time, learn of the true nature of the threat the planet faces.

A sequel God Eater 2 was released in 2013 and also got it's own Updated Rerelease.

the first half of the first game's story was made into a 13 part anime in the 2015-2016 anime season which stared a original male protagonist Lenka Utsugi who is a stand in for the player character from the game who has his own back story.