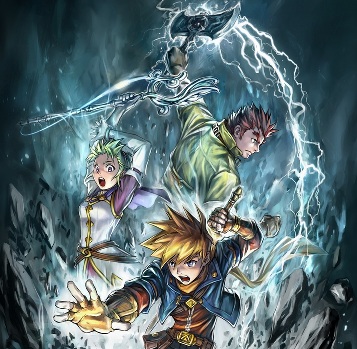 Golden Sun: Dark Dawn is a 2010 Eastern RPG developed by Camelot Software Planning for the Nintendo DS, a sequel to the Golden Sun duology that was released for the Game Boy Advance in 2001 and 2003. It was announced at Nintendo's E3 2009 conference as Golden Sun DS, then promptly disappeared off the radar for a year before resurfacing at next year's E3 as with the Dark Dawn subtitle and was confirmed for a release near the end of 2010.

A true sequel to the previous games (as opposed to the second half of the story), Dark Dawn takes place thirty years after the end of The Lost Age and the rise of the titular Golden Sun caused massive changes throughout the world. It stars Isaac's extremely-similar-looking son Matthew as he and his friends are sent on a journey to obtain the feather of a roc in order to fix a device that Matthew's friend Tyrell broke. As is typical of Eastern RPGs, the stakes get exponentially higher and soon Matthew and his friends are caught up in a new struggle to save Weyard once again.

For a list of characters in the game, refer to the original character sheet which has Dark Dawn characters too.

Tropes used in Golden Sun: Dark Dawn include:
Retrieved from "https://allthetropes.org/w/index.php?title=Golden_Sun:_Dark_Dawn&oldid=1899613"
Categories:
Cookies help us deliver our services. By using our services, you agree to our use of cookies.