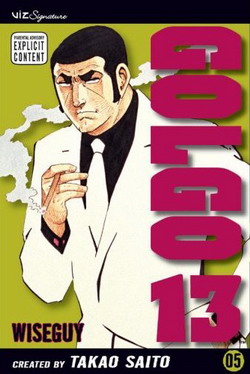 Golgo 13 is a long-running action/drama manga created by Takao Saito, first published in 1968, about the titular assassin. The manga has been adapted into an animated movie and a 60-minute OVA sequel, The Professional and Queen Bee, along with two live-action movies and several video games. A TV anime based on the series aired in Japan in 2008.

Duke Togo (codename: Golgo 13) is a mysterious Cold Sniper of indeterminate but somehow Japanese ancestry, who is notorious for never failing an assignment. He follows several rules about his assignments (for instance, he will only meet clients once, and refuses to enter long-term contracts with clients), but he will accept any job without moral compunctions. However, his clients must always tell him their reasons for the job and be honest about them -- and any betrayal or double-crossing will not be forgiven.

Like James Bond, his Spiritual Ancestor, he is a successful womanizer, but he's also notorious for maintaining the same unchanging expression during sex as he does in the rest of his life.

Although many of the stories featuring Golgo 13 revolve around the current assignment, the sheer volume of installments have led to an increasing number of stories that mainly focus on his current clients or victims, with Golgo making only a token appearance (one story focused on the effect of just the threat of his presence, with Golgo never appearing in the actual story). Several other stories have had him making brushes with history: Duke Togo spent time in prison with Nelson Mandela, he was partially responsible for Princess Diana's death while assassinating a fictional counterpart of Prince Dodi Al-Fayed, and he even shot the ballots that would have won Al Gore the 2000 U.S. Presidential elections. Golgo 13's been around.

Tropes used in Golgo 13 include:

Rita: Everything's exactly the way you wanted it. Check the piece out. Go ahead. Please.
Golgo 13: [Duke examines the rifle]
Rita: The trigger is an electronic push-button. I increased the bursts to 15 rounds per second. And the change in balance from the recoil is held below decimal. And check out the silencer kit.
Golgo 13: Rita, it's okay. I don't need to hear it. I trust you.

KGB official: I would like to have seen his expression when he missed... I bet it was the first expression he ever had!

Cindy: Who is this?
Duke: You almost had me fooled.
Cindy: Duke?
Duke: I tested the phone in the safe. It's a fake. If I had more time, I'm sure I can locate the remote switch. You oughta get an Oscar for that act you put on. Oh, and by the way, Cindy, I know who Dr. Z is: It's you.
Cindy: (hesitates)...Duke! Duuuuuuke!

Robert Dawson: "Father, please forgive me for having to leave my last message like this. I swear it will be my first and only opposition to you. Father, thank you for the enormous love you gave me for 29 years. I still remember my sixth birthday, and you baked the only cake you ever made me. It was delicious. I also remember my high school graduation where you cried the only tears you ever shed for me. It was very grateful. But thank you so much for you all your kindness to my wife Laura and my daughter Emily. Father, I know you have such terribly high hopes for me, and being incapable of fulfilling those hopes, and having to push them away caused me terrible pain. Because you see, father, I couldn't have the courage to put an end my own life. So I decided to ask someone else to kill me. I believe that he will do a good job. To my great father, the emperor of Pertrolneum: Leonard Dawson. From your disobedient son, Robert."