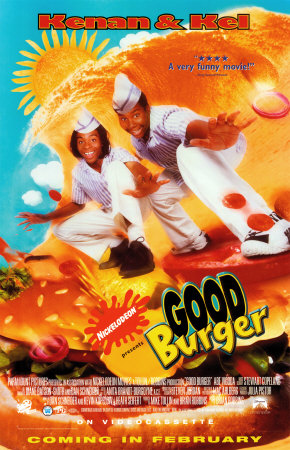 Good Burger is a 1997 comedy film produced by Nickelodeon Movies and released by Paramount Pictures, directed by Brian Robbins and produced by Dan Schneider and starring Kenan Thompson, Kel Mitchell, Sinbad, Shar Jackson, Abe Vigoda, and Jan Schweiterman. The film was based on a popular recurring sketch on Nickelodeon's sketch show All That.

Good Burger was the second film to be produced by Nickelodeon Movies.

Reviews for the film were mostly negative, garnering a 31% "rotten" rating at Rotten Tomatoes.

Tropes used in Good Burger include:
Retrieved from "https://allthetropes.org/w/index.php?title=Good_Burger&oldid=1216037"
Categories: