Bad Is Good and Good Is Bad

Everything About Fiction You Never Wanted to Know.
(Redirected from Good Is Bad and Bad Is Good)
Jump to navigation Jump to search 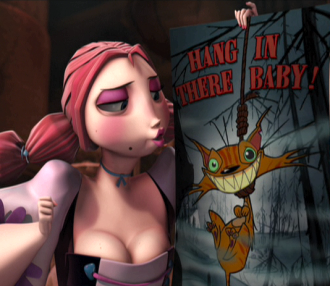 To remind you to always take time in your day for a little torture.

"He is kind, he is good, he is gentle... and, he is giving a BAD name to trolls EVERYWHERE!!!"
—Gnorga, A Troll in Central Park

Sometimes it isn't enough for a villain to be evil. They have to prove their evilness by eschewing all that is good and embracing all that is bad. They'll eat foods that disgust the good guys and laugh at funerals. They may also carry this over to their speech, making sure to only use negative phrases when most people would use a normal one, and correcting themselves if they "slip" ("Oh, goody! I mean, 'baddy.'") They'll kick puppies for sport, and describe things as repulsive like it's a good thing. They may be plagued by a Minion with an F In Evil.

Makes Your Head Asplode if you think about it too much.

See Nightmare Fetishist for the non-evil version. Not to be confused with So Bad It's Good.

Compare Above Good and Evil and What Is Evil? Villains whose strong point is not logic will sometimes use both tropes to justify this. See also Bizarro Universe.

Examples of Bad Is Good and Good Is Bad include:

X-51: My every function does result in a specified utility.
Uatu: Good. Now tell--
X-51: There is no good, Uatu. You told me this yourself. Just as there is no evil.

Sally: Jack, I just had the most horrible vision!
Jack [misunderstanding]: Wonderful!

Ms. Beezlebub: I'm so proud of you. You've done an awful job.

Inigo: I'm sorry, Father. I tried. I tried.
Count Rugen: You must be that little Spanish brat I taught a lesson to all those years ago. Simply incredible. Have you been chasing me all your life, only to fail now? I think that's the worst thing I've ever heard. How marvellous.

"Ho, 'tis nice to be a villain, wot all honest creatures fears,
And terrorise the beasts fer miles around,
Their scringin' wails fer mercy is music to me ears,
Aye, us bad'uns loves to 'ear that mournful sound!"

The Doctor: But you use your powers for evil!
Sutekh: Evil? Your evil is my good. I am Sutekh the Destroyer. Where I tread, I leave nothing but dust and darkness...I find that good!

They tell me I should change and wear a perky smile
But smiling makes my face hurt and happiness is vile.

Oh I'm sad because I'm happy
And I'm happy because I'm mad
And I'm mad 'cause it's so sappy
To be happy when you're sad!

(Yes, that was written from memory)

Lexi: Paisley, you really need to work on your bad sportsmanship.

Despair that tires the world brings the old man laughter, the laughter of the world only grieves him

When your name is Evil, bad is good, or so you'd think
But you're so very wrong, it's evil!
But being wrong is right, so then you're good again
Which is the evilest thing of all...

"I do it all because I'm evil, this is the life you see; the Devil tips his hat to me!"

It's good to be bad. It's better to be evil.

Agatha: Nah, you did good.
Castle Heterodyne: "Good." ...Hrm, perhaps...You could phrase it some other way?

Lorenda: I hate you! I'm going to my room!
Kria: Lorenda! You get back down here and throw a tantrum in this room full of rare fragile vases or else!

"Dreary is cheery and gloomy is good for me." "I loathe smiling babies, I love dogs with rabies."

The Cloak: This place is dark, cold, in horrible disrepair, and it smells like a rotten egg sandwich made with moldy limberger cheese rolled in used kitty litter. * sniffs* Ah, it doesn't get any better than this!

Boris: I got bad idea!
Natasha: You mean good idea?
Boris: You know me, I got nothing good!