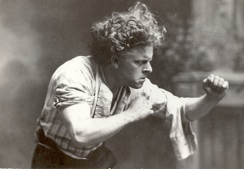 Can't get more Old School than that.

Ah, the Fight Scene: Noble sport and elegant artform that elevates two combatants through ritualized combat, proving their worth as human beings by savagely beating each other upside the head with 2x4's or whatever else they can get their grubby little paws on. No matter what the censors say, nothing beats a savage beatdown. Or does it?

Cue the entrance of Kung Fu, Savate, and other more choreograph-able fighting styles. What? So now, only monks and French dudes can kick ass? (don't even mention Gun Kata). What's a Bare-Fisted Monk who trained on the mean street of the City with No Name to do? Punch 'em with Good Old Fisticuffs, of course!

Some films insist that their Average Joe, didn't-train-in-Tibet-or-live-in-a-French-ghetto hero can upstage and beat any fighting style because his rough and tumble streetwise fisticuffs is either more resourceful, more tenacious or less "frilly" than the competition. Never mind that their opponents weren't exactly studying ballet, and usually have years of training over the hero. For this same reason, the hero will usually beat them by outsmarting them into either being Hoist by His Own Petard or a Karmic Death. If any explanation is given for why this disparity always goes in the hero's favor, it's because the hero has "heart" while his opponent is more obsessed with good form, or is all flash and no substance.

While it may seem at first sight to be only about fighting with your fists (as in Real Life Boxing is considered a proper and deadly martial art), this trope go more in hand with learning to fight in the "hard way": by pure and constant brawling for your life and limb in dirty streets and harsh experience; no nonsense of training and mock battles, is either live or die (or be brutally beaten) and do whatever it takes to keep breathing. It doesn't matter what you use for a fight as long is emphasized that the person had to crawl for the gutter to get where he is, puts weight in his/her mind and cunning, is ready to do anything to win and had seen his/her fair share of fights.

See Trying to Catch Me Fighting Dirty and Combat Pragmatist. If the hero (or the villain) is a threat not because of technique but innate Gifts like unnatural damage-soaking abilities, he is probably Unskilled but Strong.

Examples of Good Old Fisticuffs include:

Puschov:*sweeps Tintin onto the ground* Yeah, pal, that's jiu-jitsu!
Tintin: And this is a kick in the chest!

"Forgot to mention. On some worlds people fight with their feet, too. Feet, hands, rocks, pure cussed willpower - they're warriors. You, you're just a dilettante."