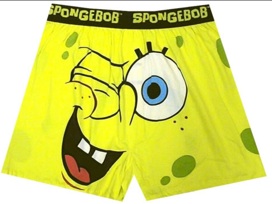 We would have gone with a Pinocchio set, but the implications of that would have been too much for even this wiki to handle.

Exposing a character's underwear is always good for a laugh. This goes double if they have underwear with a silly or embarrassing print on them. Boxer shorts with polka dots, or better yet hearts on them seem to be popular. In fact nearly everyone in cartoons seems to wear these. Well, that or these boxers cause trouser accidents.

Presumably, the use of brightly patterned underwear is a visual shorthand, to show that this is their dirty laundry, and not, say, a pair of shorts, a distinction that can be hard to see. Plus the fact that they wear utterly tasteless kecks add to the character's discomfort at being de-pantalooned, especially if they maintain a hard man reputation.

See also Stock Underwear. And no, this doesn't necessarily mean Goofy will be on the underwear—though that's not ruled out.

Examples of Goofy Print Underwear include:

Retrieved from "https://allthetropes.org/w/index.php?title=Goofy_Print_Underwear&oldid=1927155"
Categories:
Cookies help us deliver our services. By using our services, you agree to our use of cookies.