Everything About Fiction You Never Wanted to Know.
< Gorillaz
Jump to navigation Jump to search
/wiki/Gorillazcreator 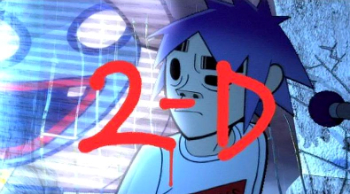 The ambition-lacking, thick-headed but sweet vocalist, who also provides keyboards and minor instruments (like melodica and panpipes) for the band. 2D used to look up to Murdoc and believed he "saved his life", despite the fact that Murdoc also kidnapped him, stole his girlfriend, dented both of his eyeballs, put him into a coma, repeatedly beat him up, sold his belongings online, and stole most of his internal organs. As of Plastic Beach, however, 2D seems to have finally smartened up, allowing him to openly express his resentment of Murdoc and to have frequent moments of cleverness and wisdom. 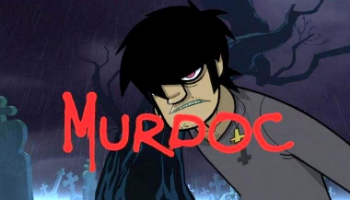 Murdoc himself states that if you Google his name, the first three words to pop up will be "sexy, edgy, dangerous". [1] A more fitting choice would probably be "immoral, egoistical, hygiene-lacking". Murdoc has provoked both the birth and the demise of the band. While he hasn't been quite right in the head since the band's creation, Phase 3 has only been proving his derangement. In the band, he focuses on playing the bass guitar, but he has also contributed with minor instruments. 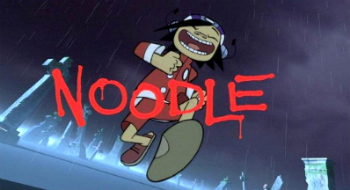 A Japanese girl who arrived in a FedEx crate at age eight at Gorillaz' doorstep, not being able to speak a word in English [2], but playing the guitar like a virtuoso. Before a certain Noodle Incident, she was known for being very energetic and high-spirited. Most of the time, she was also the smartest and most down-to-earth member of the band. As of the "El Manana" video, she has gone missing.. As of the "On Melancholy Hill" one, she is certainly alive and heading towards Plastic Beach. In the fifth Pirate Radio, she and Russell have at last made it to the island. As of February 2012, she is currently sharing 212 Wobble Street, London, with the rest of her band mates. 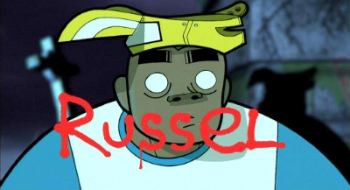 Russel comes from Brooklyn and is perhaps best known for being possesed by the souls of his dead friends, that he lost in a drive-by shooting. Ever since, he has been the most psychically unbalanced out of the group, what with the demons inside him taking advantage at times. Russel himself is a melancholic, well-spoken person (even if our character quote doesn't quite prove it) who deeply cares for Noodle. He provided drums for "Gorillaz" and "Demon Days", but he was not invited to play on "Plastic Beach" because nobody could find him. Of course, he doesn't have this problem anymore.

Currently living with the rest of the band on 212 Wobble Street, London. Sleeps on the roof of the apartment. 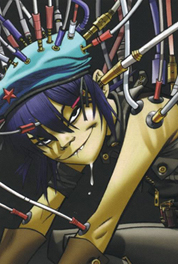 No voice actor as of yet.

Built as a replacement for the supposedly late Noodle, Cyborg is a meticulous replica of her fourteen-year-old self. She has all the musical skills of the original with none of the personality, and is programmed to obey Murdoc's every command. Cyborg is a firearm aficionado and often acts as a bodygaurd, but also has to spend most of her time charging. 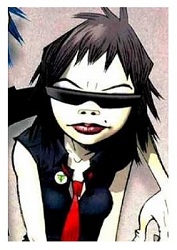 Gorillaz guitarist, first appearing in Rise of the Ogre. She was the then-two-month-long girlfriend of Stuart Pot. During their time together, Paula was noted to be a sub-par musician (or at least, not as good as her successor). In a brief interview, she waxes nostalgic on her encounter with Mr. Niccals. One fateful night, Russel caught her with Murdoc inside the third cubicle of the bathroom. For her betrayal, she was promptly kicked out of the group.

Clearly bitter and damaged from the ordeal, Paula seemed to be on edge when telling her side of the story, while unapologetic about the affair with the green-skinned satanist, she nevertheless goes on with her life.

Del was a rapper from Brooklyn who befriended band drummer, Russel Hobbs when Russel was transferred to a high school in Brooklyn after being possessed and then exorcised. He and Del became best friends quickly and remand friends even after Del's death. Del, along with all of Russel's new friends were gunned down in a drive by shooting in which Russel was the only survivor. The souls of all of Russel's friends, including Del, all took up residence inside of Russel for many years. Del was finally removed from Russel by death, who ripped Del out of Russel to take him to the great beyond during the bands hiatus in 2003. Russel was effected greatly by this and had a nervous break down. Del has not been heard from since

Debuting in Phase 3, the Boogieman is an ancient force of evil with whom it was implied that Murdoc made his Deal with the Devil. While his first shown victims were merely a cop and a manatee, it is made very clear in the video for Rhinestone Eyes that he wants to collect Murdoc's soul to complete their bargain.

As of the video for DoYaThing, however, it seems that he's given up on that, now living with the band on 212 Wobble Street, London.

Retrieved from "https://allthetropes.org/w/index.php?title=Gorillaz/Characters&oldid=1734370"
Categories:
Hidden category:
Cookies help us deliver our services. By using our services, you agree to our use of cookies.