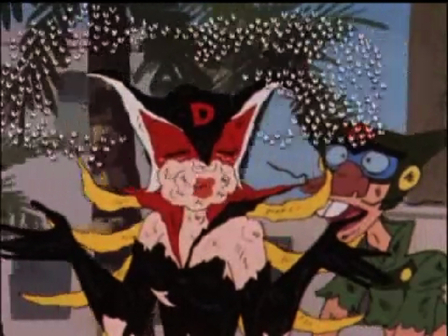 You should jam an epipen in your arm. Now!

It's a beautiful day in the park. You're enjoying a picnic or some other outdoor activity... What's this? A pesky bee? Just flick him away. It's so tiny, he's hardly a bother.

Ah, but now you've made the bee mad. It's got a stinger, and it's not afraid to use it. And it's brought friends. Hundreds of them, all ready to sting you.

There's nothing left but to run for your life!

Subtropes include Bee-Bee Gun. Related to Everything's Worse with Bees and The Swarm. While The Swarm refers to anything tiny and dangerous in large numbers, Gosh Hornet is exclusive to stinging insects (particularly bees, wasps, and hornets).

This is mostly an animation and comedy trope.

Those using the trope often depict the bees as males, and often use honeybees even though that kind dies after using its sting. The swarm will also share one mind and will often form shapes in the air like an arrow pointing to its target, or a weapon.

To escape the swarm, the character will almost always jump into a body of water. Since bees can't swim, they are usually forced to give up - which isn't advised in real life, since they wait.

Examples of Gosh Hornet include:

When Mrs Gorm (Aunt Eloise)
Was stung to death by savage bees
Her husband (Prebendary Gorm)
Put on his veil and took the swarm.
He's publishing a book next May
On How to Make Bee-keeping Pay.