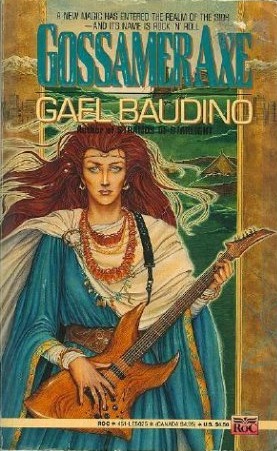 An Urban Fantasy novel by Gael Baudino, Gossamer Axe is the story of a "young" woman named Chairiste ni Cummen who was actually born fourteen hundred years ago, and through various magical means has survived into the year 1987. In the sixth century, Chairiste and her lover, Siudb, were captured by The Fair Folk, and trapped in their static, unchanging world for centuries. In the late 18th Century, Chairiste managed to escape with Ceis, the Sidh bard Orfide's best harp, but is forced to leave Siudb behind.

For two centuries, she has tried repeatedly to win back Siudb from the Fey, following the gate to their realm as it made its way around the world, until she ended up in Denver, Colorado. Under the name Christa Cruitaire, she has been passing on some (but not all) of her skills with the Irish harp to students, when one of them decides to pay her back by taking her to an Yngwie Malmsteen concert.

Christa is so overwhelmed by the magical possibilities of The Power of Rock that she throws herself wholeheartedly into Denver's metal scene in order to put together a band and finally defeat the elvish harper to win back her lover.

Tropes used in Gossamer Axe include:
Retrieved from "https://allthetropes.org/w/index.php?title=Gossamer_Axe&oldid=1783014"
Categories: