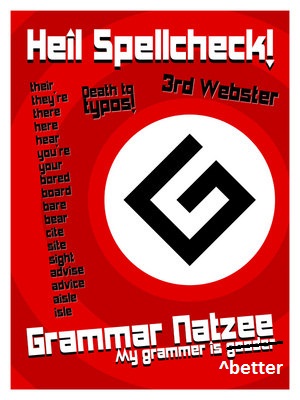 Somewhere along the line, Grammar Nazis got more into the form than the content. They sometimes leave snarky little notes in discussion areas about the correct use of italics or where the apostrophe goes in "its/it's." They don't actually add any new content—except possibly passive-aggressive "help" articles on proper usage of the semicolon. At their worst, they are known for insisting on "rules of English" which are derived from French and other Latin-descended languages, and were invented for the sole purpose of annoying English-speakers. They'll also likely become a Serial Tweaker, careful to quickly correct their own mistakes. (We hope.)

For example, the French faction believe one is never to split infinitives because Latin and many other European languages cannot. Ending a sentence with a preposition is also something they will not tolerate, even if it invariably leads to awkward or confusing renderings.

More moderate Grammar Nazis, ironically, strive to treat English like the Germanic language it is.

Be careful when and how you accuse someone of being a Grammar Nazi, because doing so is, by definition, an automatic invocation of Godwin's Law. Being a Grammar Nazi can occasionally be a good thing, especially when Illiteracy Communists are utterly mangling the English language. And when you do so, don't misspell "Grammar" (like the trope image did). This isn't Frasier. (Or Greek.)

Often, people will be accused of being Grammar Nazis by someone who simply cannot grasp simple second-grade English concepts, such as confusing "you're" for "your". Even worse, a Grammar Nazi will jump all over people who use grammar that is technically incorrect but that seems correct because everyone (except for the Grammar Nazis, of course) uses it, such as "It is me" instead of "It is I."

But of course, some people -- Godwin's Law or not - bear the title with pride. They seek order within the literary confines of the Internet. S'not such a bad cause, aye? A good rule of thumb to distinguish between "good" and "bad" ones is: the former will usually overlook ovbious tyops.

Also, you might want to use the term "Grammar Police" around those more easily offended, but that street runs both ways. In many cases the person being criticised is fairly justified in attacking the Grammar Nazi right back; we all make mistakes and there are plenty of dyslexics and dyspraxics on the internet - not to mention all the people who aren't quite as keen on your pedantic crusade, nor with your fixation on "Ten Items Or Less" signs.

Compare You Make Me Sic.

Examples of Grammar Nazi include:

Incidentally, he has a similar fate as the That Mitchell and Webb Look above.

Retrieved from "https://allthetropes.org/w/index.php?title=Grammar_Nazi&oldid=1946924"
Categories:
Cookies help us deliver our services. By using our services, you agree to our use of cookies.