Everything About Fiction You Never Wanted to Know.
(Redirected from Grand Theft Auto Vice City)
Jump to navigation Jump to search 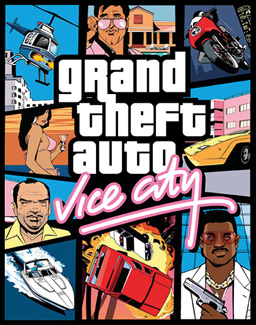 A year after Grand Theft Auto III tore up the gaming world, Rockstar topped it with the sequel, Grand Theft Auto: Vice City. Unlike its predecessor, Vice City features a full-fledged protagonist in Tommy Vercetti; Tommy is a Mook who was too hot for Liberty City, having spent fifteen years in jail for killing eleven people during a job to assassinate one man in the neighborhood of Harwood (earning him the nickname "The Harwood Butcher"). The Forelli family knows he'll make trouble again if he's allowed to roam Liberty City unchecked, so they send him down to Florida's Vice City to keep him out of the way -- and to get into the new "businesses" growing there.

Things don't turn out well on Tommy's first job. He's betrayed by one of the Vice City bosses; left without any money (or the cocaine that he had been sent to purchase), and has Sonny Forelli breathing down his neck for the failure. Tommy's new mission is to get even with those who set him up...and possibly carve out a criminal empire of his own.

Vice City takes place in 1986, and Rockstar did its best to capture the look and feel of that time -- or at least how it looked in Miami Vice. (It helps that the game had a killer '80s soundtrack to go with it.)