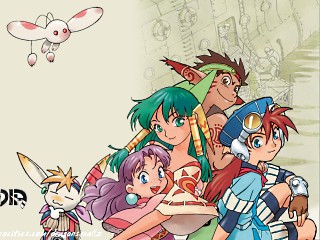 After making the first two Lunar games, Game Arts developed Grandia. Being primarily aimed at children, the plot makes no efforts to be ground-breaking. Hot-Blooded protagonist with red hair and blue clothes? Check. Ancient civilization? Check. The girl? Take a guess. Tropes Are Not Bad, of course. Some enjoy the plot, as it makes interesting use of the Motif of the "End of the World" (no, not that one) and adventurers, the protagonist is a great example of an aversion of The Chosen One, and the whole cast of characters is a textbook example of good Character Development in action. It also does an unusually good job of making the world seem like it's actually planet-sized, whereas most RPGs have a world that comes off as barely above Baby Planet size.

It was released on the Sega Saturn, but only in Japan. The game was ported to the Sony PlayStation and localized to the US.

Tropes used in Grandia (video game) include:
Retrieved from "https://allthetropes.org/w/index.php?title=Grandia_(video_game)&oldid=1621668"
Categories:
Cookies help us deliver our services. By using our services, you agree to our use of cookies.