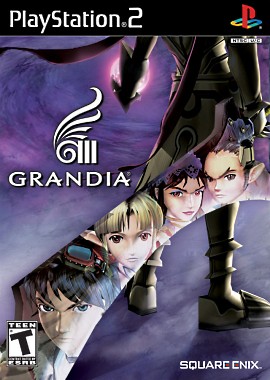 Grandia III is so far the last game in the series. Another world saving and globe trotting adventure, but this game introduces a bit more Magitek, especially old fashioned planes.

The main character is a kid called Yuki, an amateur mechanic and pilot. He idolizes the famous hero Sky Captain Schmidt, and wishes to replicate his achievement of crossing the ocean on a plane of his own design. Unfortunately, his Hot Mom Miranda causes his latest attempt to fail (when she sneaks on board, thereby adding too much weight to achieve the required height) and while he's recovering from this, Yuki notices a young girl being chased by Bad Guys. Being the RPG hero he is, Yuki immediately saves her. The girl is named Alfina, one of the last Communicators: a tribe that can converse with the god-like Sacred Beasts, protectors of the planet. Oh, and she's looking for her missing brother (and Communicator) Emelious, who was last spotted hanging out with some incredibly suspicious characters. Cue adventure!

Released on the PlayStation 2, and also published by Square Enix, but still developed by Game Arts. It should be noted that this game was rushed through its development, and it shows.

Tropes used in Grandia III include:
Retrieved from "https://allthetropes.org/w/index.php?title=Grandia_III&oldid=1855513"
Categories:
Cookies help us deliver our services. By using our services, you agree to our use of cookies.