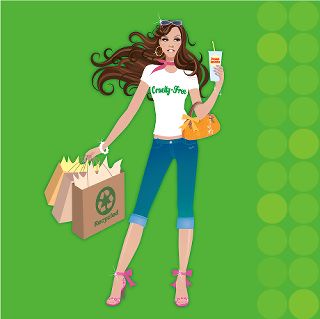 An overtly comical liberal or left-wing character, usually with a penchant for tie-dyes, crystals, veganism, free love, oneness with nature and anything that is 'all-natural'. This character will commonly not be very well grounded, but cheerful; flighty, but not scatter-brained enough to qualify as The Ditz, yet the character is often associated with being book smart, and will have a tendency to make her opinions known whenever possible. She will love any kind of alternative medicine and will refer to actual real doctors as "allopaths" and "greedy". Of course, she will never actually have a health problem worth seeing a doctor about it, because any problem she has will be all in her head.

Male versions of this character (granola guys) are exceedingly rare, and are mainly depicted as aging 50- or 60-year-old hippies, either Tommy Chong-esque Erudite Stoners or balding guys with ponytails who haven't yet accepted the end of the 1960s. Very occasionally you will see young men who fall under this trope, and who are if anything treated as being even more ridiculous than the female version. Expect them to play the guitar very badly. However, such characters (regardless of gender) are almost always portrayed as sincere and well-meaning.

Examples of Granola Girl include:

Lords and Ladies mitigates this somewhat, however-Magrat's cottage has traditionally housed thoughtful witches who carefully researched things and wanted to know, for example, when a spell calls for eye of newt, does left or right make a difference? Granny is a better witch because she knows it doesn't matter, but she nonetheless goes to Magrat for help when someone is poisoned because she knows that Magrat's beliefs do make her a better doctor.

Flutie's immediate characterization paints him as aspiring to this archetype rather than succeeding in it. He wants to give Buffy a fresh start, tears up her transcript, and then, horrified, tapes it back together after glancing over the specifics, and tells Buffy the kids know they can call him by his first name but then adds, "but they don't." He was a nice guy though, a sort of hypocritical but well-meaning Reasonable Authority Figure, as opposed to Snyder who openly has it in for Buffy from day one.

Retrieved from "https://allthetropes.org/w/index.php?title=Granola_Girl&oldid=1928058"
Categories:
Cookies help us deliver our services. By using our services, you agree to our use of cookies.