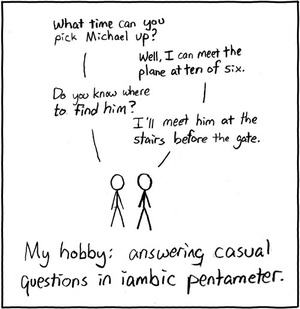 Sometimes in works, there is a certain kind,
who always have poetic forms in mind.
In every situation—great or small—
they can't resist the urge to rhyme at all.
Though often plainer words would suit much better,
Gratuitous Iambic Penta-MET-er.

An iamb is a pair of syllables where the stress falls on the second one - ba-DUM (if it goes DUM-ba it's a trochee). Pentameter is verse with five stressed syllables (tetrameter has four, heptameter has seven, etc), so iambic pentameter has five iambs (usually ten syllables, but odd unstressed ones at the beginning or end don't affect the meter much). This kind of verse is very common in Shakespeare, as in for example "Un-EA-sy LIES the HEAD that WEARS a CROWN" (Henry IV Part 2). This trope can apply to any poetic dialogue though.

Examples of Gratuitous Iambic Pentameter include:

Ryan Stiles: Spock, put the tribbles down and help me with the ship!

Ainsley: Mr. Tribbey? I'd like to do well on this, my first assignment. Any advice you could give me that might point me the way of success would be, by me, appreciated.
Lionel Tribbey: Well, not speaking in iambic pentameter might be a step in the right direction.

It's all so strange, What's even stranger though
I speak in blank verse like the characters
Unrhymed Iambical Pentameter
It seems to come quite naturally to me
I feel so eloquent and... eloquent.
My God. I think I'm on an acid trip.

This one is machine and nerve, and has its mind concluded.
This one is but flesh and faith, and is the more deluded.

Gravemind: I have the memories of many poets far beyond your limited human culture. And I have the quickness of intellect to compose all manner of poetic forms as I speak rather than labor over mere words for days.