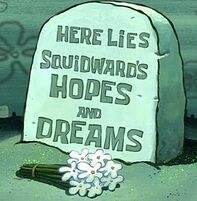 Gravestones are generally considered be somber or reflective, though it's also not out of place to put funny epitaphs on them or invent some for the purpose of a joke. It could be a poem, a record, or a suggestion of an ironic or strange death. The same extends to the fictional world, where Grave Humor can also be used as a Shout-Out or a Take That, with the latter often suggesting the fate of a character from another, rival work. This is especially common in video games, as the player may blindly ignore the graveyard, or be too busy fighting zombies. Naturally Truth in Television.

Related to Black Comedy. Compare The Fun in Funeral.

Examples of Grave Humor include:

Retrieved from "https://allthetropes.org/w/index.php?title=Grave_Humor&oldid=1849165"
Categories:
Cookies help us deliver our services. By using our services, you agree to our use of cookies.