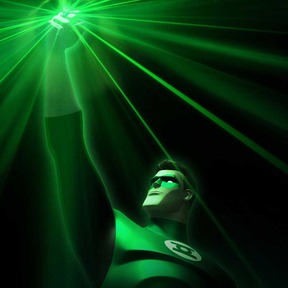 The CGI animated series based on the DC Comics superhero Green Lantern, made by Bruce Timm. Made to cash in on the movie that aired early in the year, it's the first CGI series Bruce Timm has ever worked on.

The plot revolves around the Green Lanterns Hal Jordan (Josh Keaton) and Kilowog (Kevin Michael Richardson) going out, against the wishes of the Guardians, with the help of their A.I. ship Aya (Grey De Lisle) to find out who has been killing Green Lanterns on the edge of their system.

The Red Lanterns are the Big Bads of the series for the first season, with plans to also bring in Saint Walker (a Blue Lantern) and Larfleeze (Agent Orange) in the season as well. Sinestro will not make an appearance until the second season, due to his role in the movie.

The 44 minute pilot premiered on Cartoon Network on November 11, 2011, and the show made its official premiere as part of CN's DC Nation block on March 3, 2012.

Tropes used in Green Lantern: The Animated Series include:
Retrieved from "https://allthetropes.org/w/index.php?title=Green_Lantern:_The_Animated_Series&oldid=1482047"
Categories:
Cookies help us deliver our services. By using our services, you agree to our use of cookies.