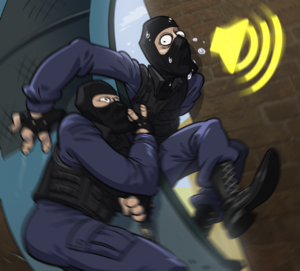 Here you are just having a good time with your friends on your favorite online game. Everyone in your party is pulling their weight and gaining lots of items and gold. What Could Possibly Go Wrong?...wait, what's that sound? You suddenly hear a high level spell being used and before you can turn around and blink, you and your friends are dead. Who used the spell? The giggling player within your own party as he runs around looting your dropped items and runs away.

You just met another form of a Troll for online games, the Griefer.

The Griefer is the most known term for this type of player. The act of griefing dates as far back as the days of old arcades in your local pizzeria. Methods of griefing included but were not limited to reaching over and pressing buttons on games people were playing, turning off the game while it was in use, attacking players in games where friendly-fire exists, physically distracting them (such as covering their eyes or tickling them), or tilting a pinball machine. But these early griefers were much more contained as they couldn't grief people on the other side of the world, oh no, they were limited to Arcade games. Plus, you knew who they really were, and they were within range of your foot or your hand. When online gaming became the norm, Griefers jumped all over it.

Griefers are also known for ruining games of sports.

Griefers play online for one sole purpose: to annoy and anger the other players. It doesn't matter to the Griefer if he gets killed in the game, loses the match, or gets booted/banned from the server. As long as the Griefer pisses off someone, he has already won. Griefers enjoy seeking out new and interesting ways to ruin the games for others. Griefers cannot be stopped by countering their strategies on a case by case basis, joining a different game, or even reporting them to a moderator or adminstrator, because they don't care. They also love to be away from the keyboard during Player Versus Player games

Some Griefers have formed communities to improve their irritating strategies and induct new misanthropes to their circle of jerkhood. Occasionally, Griefers post their plans and "achievements" in forums where the acts are not looked upon with such favor, resulting, predictably, in Flame Wars and Bans all around.

Recently "vigilante" griefers have sprung up in some games, harassing other players for the sake of "justice" or "fairness". This type of player can be an extremist Scrub who, rather than complaining that a certain technique is unfair and cheap, decides that the easiest way to keep people from spamming the "cheap" technique is to attack only the players who are using the shunned spam attack.

There exist videos of people griefing players and sometimes getting a funny reaction...which has sadly done exactly what the griefers want...to get people ticked off and laughing at something. Because thanks to videos of griefing getting loads of positive comments on Youtube and forums internetwide...people now think they can grief to be funny, when in reality, it was only funny the one or two times it was actually done in the video. After that, it's about as unfunny as Seinfeld is today.

No real life examples, please; it's not worth the aggravation

Examples of Griefer include:

And while most sets have spells that kill or disable your opponent's stuff, in New Phyrexia they have added effects that rub your victory in their face, as with Numbing Dose, Victorious Destruction, Psychic Barrier, Glissa's Scorn, Enslave, Phyrexian Ingester, etc.
Or, as development team member Tom LaPille puts it:

Retrieved from "https://allthetropes.org/w/index.php?title=Griefer&oldid=1835382"
Categories:
Cookies help us deliver our services. By using our services, you agree to our use of cookies.